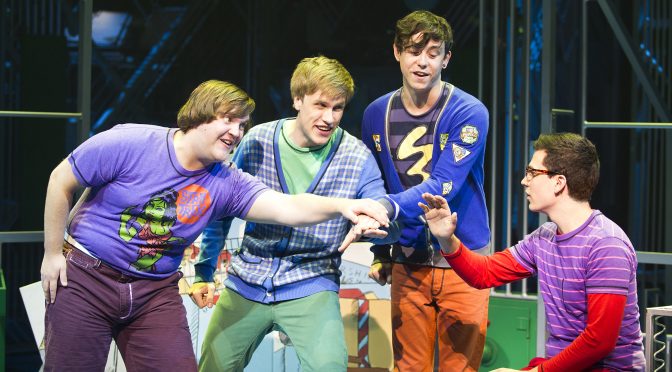 A new musical is an exciting prospect for the critics: the thrill of the potential next hit or the perverse pleasure of a failure. Most shows, and Loserville, the newest to open in the West End only last night, fall firmly between the two extremes. The question is whether or not you should bother to see it – and my answer is yes, especially if you have someone young to take along.

Loserville is a coming-of-age story and, like many in the genre, is probably best embraced by those still young. It is set around the idea of the first ever email and presented to the audience as if they can’t really imagine there was ever a world without the web. The ‘geeks in their garage’ characters have the laudable aim of helping the world to communicate, and the mildest of reservations about corporate capitalism. It’s all very wholesome fun.

A joint effort from Elliot Davis and James Bourne, the later formerly of Busted fame, it’s spot on when it comes to a familiar kind of teenage angst. The insecurity, frustration, even anger of young people, along with their sense of fun and excitement, is palpable. All expressed in perky guitar pop, highly catchy and impressively effective as storytelling, it should be a hit.

The kids coming of age in Loserville do so in America in 1971. This poses some problems – the cast struggle with their accents, especially when it comes to singing them. There’s little sense of period, only the briefest musical reference, and any sense of nostalgia fails to convince. The dialogue lacks snap and the jokes aren’t funny enough: it’s passable to rhyme Uhura with cooler in song, but the sci-fi gags are overplayed in the script. However, the production itself is well done, directed with clarity and conviction by Steven Dexter, and aided by Francis O’Connor’s charming low-fi set.

And none of these criticisms are going to stop you having fun. The story of Michael Dork and his friends’ trials and passions goes at such a pace, any subtlety would probably be steamrollered anyway. The large cast, mostly making their West End debuts, are so full of energy, you can’t help but admire them. Highlights include Aaron Sidwell in the lead role and Richard Lowe as his sidekick Lucas Lloyd.

Alongside their enthusiasm, that sense of teenage intensity means the cast occasionally perform with almost embarrassing sincerity – once again your reaction probably depends upon your age. Bourne knows what he’s doing, he’s sold enough records to teenagers already, but shame on my cynicism – like Google, Loserville doesn’t have an evil bone in its body, and is sure to be a winner with plenty.

Written 18 October 2012 for The London Magazine