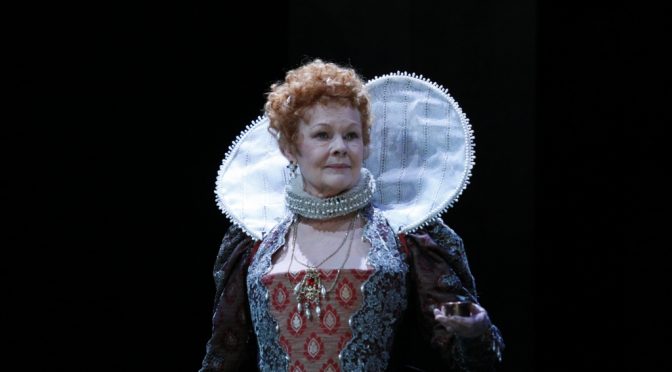 Peter Hall and Judi Dench first worked together on A Midsummer Night’s Dream in 1962. In 1969 they filmed another, different production. Now they are working together again at Kingston’s Rose Theatre. But is reunion the right word to describe this much anticipated theatrical event? It is more pleasing to think of these great artists as demonstrating one of the joys of theatre – its constant reinvention and development, the work they have accomplished over the years bringing us closer and deeper to a text they have engaged with so many times before.

Having played the same character for nearly 50 years, some kind of conceit might be thought necessary for Dench to revive the role of Titiana, especially given that in the past she has portrayed the role in a startlingly sensual manner. So, in a crowd-pleasing masterstroke, this Queen of the Fairies becomes Old Queen Bess herself. As she makes her entrance before a word of the play is spoken, we are reminded that the play was first performed before Elizabeth I. Dressed in sumptuous costumes by Elizabeth Bury, Dench looks just like everyone’s mental image from all those wonderful portraits – or at least her Oscar-winning film depiction. Costumed as the virgin Queen throughout, her Oberon, Charles Edwards, has matinee idol looks and reminds us of one of the younger courtiers Elizabeth flirted with, sometimes dangerously, in her later years.

Oberon and Titania’s relationship brings out some of the melancholy present in A Midsummer Night’s Dream – it is very much a play about the passing of time. For humour, the production is blessed with a wonderful performance from Oliver Chris. While it is difficult not to get some laughs from one of Shakespeare’s greatest comic roles, his Bottom (see how easy it can be) is really toned. He shows restraint in not prolonging the jokes, works very well with his Thisbe, and has a physicality that means he can even get the laughs when his impressive ass’s head is hiding his face.

Dench and Chris are not alone in making this production hugely entertaining. The pairs of lovers, Helena, Hermia, Lysander and Demetrius are all played well by Rachel Stirling, Annabel Scholey, Tam Williams and Ben Mansfield. An extremely good-looking bunch, each manages to differentiate their role clearly and speak wonderfully. It is difficult not to view these actors as somewhat in competition – maybe that gives the edge to the boys’ fantastic bravado in a great excuse for a fight scene. All four work hard, although Stirling takes the prize. Her distress at their behaviour seems delightfully genuine and the anger towards her one-time friend deliciously bitchy.

Peter Hall places the production entirely in its Elizabethan context. Bottom is an Elizabethan workman, in awe of his Queen but confident in his own opinions, the Lovers remind us of those Hilliard miniatures, caught in a summer of England’s Golden Age. This consistency is delightful and only let down by some small instances.  Playing Theseus as an English country duke, Julian Wadham possesses so little authority he seems simply dull and his Queen somewhat bored.  The local mechanicals are predictably cast (this group seems condemned to come from Birmingham in whatever production is staged).

These are small points given the quality of production that is presented here. Whether or not they are inspired by their leading lady, this cast excels at speaking Shakespeare in a clear and fresh manner. The direction has a warranted confidence that means you can just sit back and enjoy. The Rose has an undoubted and well deserved success on its hands that, with any luck, will turn around the fortunes of this wonderful new theatre.

Written 19 February 2010 for The London Magazine