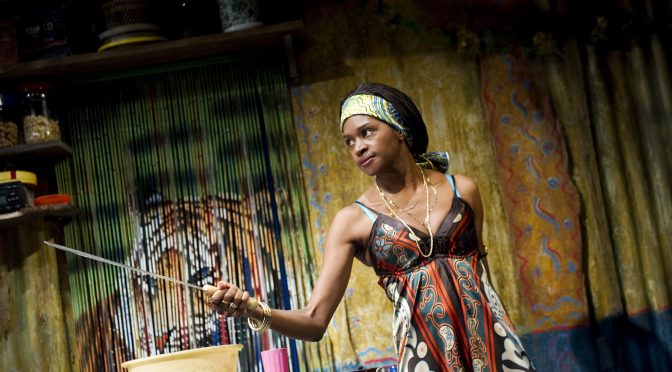 Ruined began with a trip author Lynn Nottage took to East Africa in 2004. Wanting to write about war through the eyes of the women involved, she interviewed refugees from the Democratic Republic of Congo. The stories she heard form the core of her Pulitzer Prize-winning play, now given its European premiere at The Almeida Theatre.

The testimony Nottage took down is often so painful and extreme that you are powerfully shaken by its veracity – nobody could make this up. The victims of war she spoke to suffered many kinds of trauma, but Ruined focuses on the shocking practice of rape as a weapon of war.

The play takes place in Mama Nadi’s brothel. She employs those who cannot go home after their abduction and rape, since it is said they would bring shame upon their families. The women serve the various armies who battle over the country and the miners who are there to exploit the Congo’s rich natural resources. The prostitutes are not the worst off. Other women are left physically mutilated by their experience, in constant pain and unable to bear children. They are the ones who are said to be ruined.

Sophie (Pippa Bennett-Warner) is one such woman. Her uncle brings her to Mama Nadi and begs for her to be given a home. She comes with Salima (Michelle Asante) and meets Josephine (Kehinde Fadipe). These are three magnificent performances. Each woman carries a heavy emotional burden and as their stories unfold, we learn not only of their pain but also of their dreams. The fear they share is mixed with anger and also hope. These are performances crafted with great skill to give the characters the dignity they deserve.

Jenny Jules is just as wonderful as Mama Nadi. It really is one of those performances of a lifetime. Mama seems to care only for money, everyone is simply a customer, regardless of their politics, and her only concern is to put food on the table. Like Scarlett O’Hara or Mother Courage, she is called a ‘devilish optimist’ for making money out of the turmoil around her.

By feeding these women, she is also looking after them and the fine moral line she treads between fighting for them and bullying them in turn only becomes more complicated as we learn her story. It is a wonderfully nuanced role and performance. Her formidable approach does not just win respect – it gets laughs as well. The budding romance between her and Sophie’s uncle, played with charm by Lucian Msamati, moves from touching to heartbreaking as Mama Nadi’s secret is revealed and her hopes exposed.

Against the constantly threatening backdrop of war, violence pervades Ruined. The soldiers who patronise Mama Nadi’s are a convincingly frightening presence. It is not just gunfire and explosions that these women have to be afraid of but each client they prostitute themselves to. It makes for great tension and drama. But the noise isn’t all artillery – there is music as well – life goes on at Mama Nadi’s because these victims of war are also survivors. The story of this survival is one of those rare pieces of theatre that needs to be seen by as many people as possible.

Written 27 April 2010 for The London Magazine