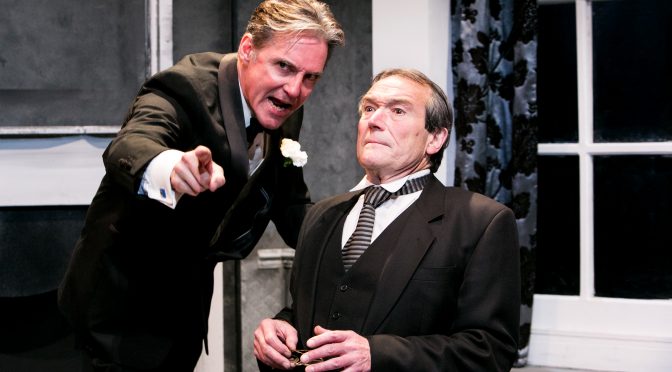 After a sell out run at the Finborough Theatre, The White Carnation finds a new home at the Jermyn Street Theatre and started a short run last night. R.C. Sherriff’s story of a successful stockbroker’s life, which takes a supernatural twist when he returns as a ghost seven years after the war, has waited sixty years for its first revival and this skilled production serves it well.

In the lead role of self-made man John Greenwood, Michael Praed is a touch too urbane, but he deals with the incredible situation stylishly and is full of charisma. Praed delivers the play’s thoughtful moments well, including a burgeoning romance with a librarian; it’s not his fault this aspect of the writing feels like an underdeveloped J.B. Priestly play. Greenwood seems oddly tranquil with his predicament. The reckoning this ghost needs to settle is with his wife, but Sherriff adds atonement – as a kind of fable – too late.

The majority of the play deals humorously with the implications of Greenwood’s spectral status. Firstly, with the town councillor, played by a delightfully outraged Robert Benfield, who hopes to solve housing problems by tearing down the property he now finds haunted (he deals with matters in a far more civilised fashion than I imagine Eric Pickles would). Then with a nice gentleman from the Home Office, managed in appropriate style by Philip York, hoping this inconvenient ectoplasm will emigrate. The local vicar, Benjamin Whitrow, truly stealing his scene, trumps both.

Ridicule of the establishment in The White Carnation is effective, but gentle. Surely it all seemed a touch tame back in 1953 as well? Even Blythe Spirit has more bite. Now the whole affair is gloriously steeped in nostalgia, a fact that director Knight Mantell and his cast seem cleverly aware of. This quality affair is too sweet for sure, but it’s also a treat.

Written 7 February 2014 for The London Magazine