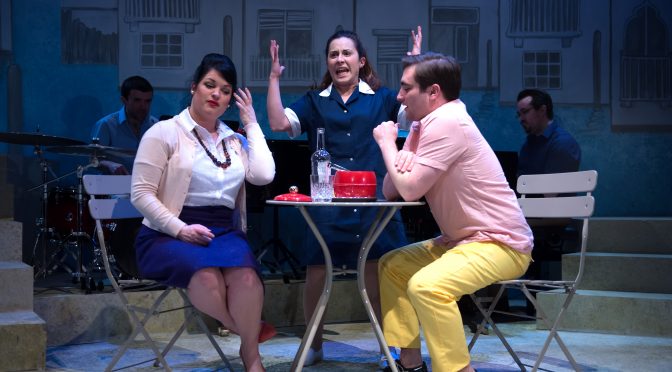 The Park Theatre’s first musical opened last night with the north London venue handing over to the Charles Court company for a production of Do I Hear a Waltz? It’s a real collector’s piece for musical theatre obsessives, being a one-off collaboration between Richard Rodgers and Stephen Sondheim that is seldom performed.

Rodgers and Sondheim make a fascinating combination. Sondheim’s lyrics bring wit and intelligence to Arthur Laurents’ book, based on his own play, while Rodgers’ ravishing score rises to the challenges of the younger artist and provides glorious tunes. Strangely, put together they often sound odd – a mix of the “ridiculous and the sublime” – a lyric that sums up the show and that I am sure we are supposed to take away with us.

A sensitive secretary visiting Venice has a holiday romance that she finds complicated, even though what’s on offer is simple. Commitment isn’t on the mind of the married antiques dealer she meets, but their shared sense of melancholy gives the whole show a kind of magic, despite its pragmatic approach to affairs of the heart. Added observations about Americans abroad and Italians at home are wry, if a touch too elaborated, and the scenario is impressively novel. But, in general, the premise is too slim to really grab you.

The production itself makes the best of things. There’s a fine performance from Rebecca Seale in the demanding lead role and Philip Lee sounds lovely as the charming shopkeeper looking to add to the itinerary of her holiday. Best value comes from the signora who runs the pensione in which the action takes place, with Rosie Strobel giving the “very, very” character her all. The bare staging and musical accompaniment from just piano and percussion reflect a chamber music feel, but I can’t help wondering what a fuller sound would have been like, as some numbers seem to cry out for it.

Musical director David Eaton has done a wonderful job and clearly knows his stuff but it’s speculation about the piece that will probably excite the aficionado – I suspect it’s more of a curiosity to collect than something that might cross over to a bigger audience.

Written 7 March 2014 for The London Magazine