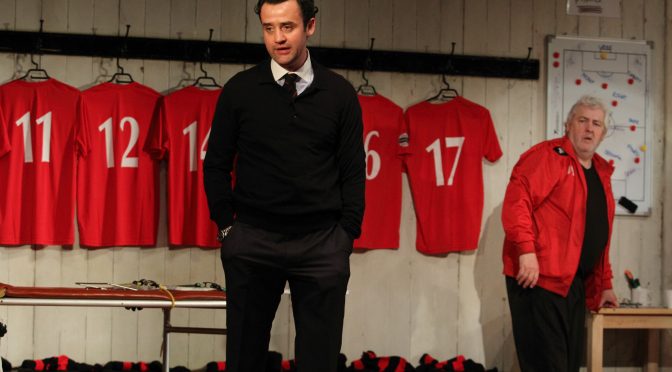 I’ve no interest in football, and I can barely understand how anyone has. But the first play by Patrick Marber in eight years has to be seen. OK, sport can make good drama. And Marber uses what he calls the “dreaming game” to look at themes of loyalty, masculinity and society. But the real shock is that this play has changed my mind about soccer: the passion is so convincing, it’s contagious.

Don’t worry, I’m not going out to a match or anything. But the three ages of man we meet in the changing room of a non-league club – the kind we are told is like a thousand others – are believable despite taking their sport so seriously. Although it contains a fair few jokes, The Red Lion is a serious play, about elation but mostly desperation.

These are great characters and it’s heart wrenching to see this trio flounder. Each speech changes the focus of the play with fluidity – each role becomes, literally, the playmaker by turns. And I am reliably informed each man is instantly recognisable. Taking along my sole football fan friend was my game plan.

First on stage is the club’s Kit Man, a former legend, whose history is troubled. He’s said to “drink too much, think too much and feel too much”. Peter Wight brings out the role’s layers, handling the humour precisely: his devotion to the team is religious, which gets laughs at first… but has the most serious consequences.

Daniel Mays plays the club’s on-the-make manager, with the “courage to be despised”. He speaks in clichés: take his boast at being a bad loser, “I’ll kick a puppy. I’ll kick you.” But with May’s expert delivery, and Marber’s masterly exposition, the character intrigues against the odds.

The object of both men’s adoration is a talented youngster played by Calvin Demba. Whether they see him as a commodity or some kind of salvation, a contrast made subtle by the plot, they each want to use him. But the kid has a past of his own. Where innocence or purity lie is a rich seam in the play.

Faultlessly directed by Ian Rickson, who gives this brilliant text every chance, The Red Lion has a melancholy streak that stops and starts play. Footballers are said to have three deaths, at different stages of their careers, but we see more than that here. A genuine love of the game drives Marber, but machinations in the club clearly have wider parallels. What’s searched for is a player with “aggression, technique and guile” – Marber’s writing has all three. If theatre had a transfer season, this would be the play to bid for.