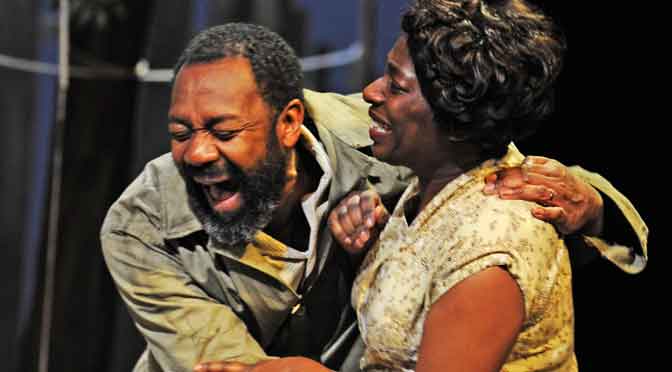 A new production of August Wilson’s play Fences opened at the Duchess Theatre last night following a successful run in Bath that has already earned it strong reviews. A family drama, set in Pittsburgh in 1957, it focuses on the patriarch Troy Maxson, a fascinating creation, depicted by Lenny Henry in a performance that is not to be missed.

Now well established as a serious actor, Henry gives a thoughtful, hard-working performance that plumbs the depths of this unsympathetic character. Troy is almost a tyrant, sometimes despicable, but his determination to turn his life around after time in jail, and awareness of his responsibilities makes you grudgingly respect him. Henry brings out the man’s vulnerability, and deals superbly with Wilson’s wry humour – Troy is charismatic and imminently watchable.

Troy is also an ordinary, working class, man. His struggles and aspirations provide the insight into African-American experience Wilson dedicated his work to. A talented sportsman who feels racism prevented his career, Troy is a disciplinarian driven by disappointment. Relations with his sons (played admirably by Peter Bankolé and Ashley Zhangazha) are on a knife-edge. More complex still is that with his disabled brother, a veteran with religious delusions, an enigmatic part played with conviction by Ako Mitchel.

Wilson’s play feels strangely timeless. It was written in 1983 yet sits well alongside Miller, even O’Neill; all three American greats wrote works that are hefty, lengthy and never afraid of metaphors. Although director Paulette Randall could pick up the pace at times, the production is a quality affair with a serious tone that earns respect.

The heart of the play is strong enough to keep it very much alive, embodied by the role of Troy’s wife, Rose. In this part Tanya Moodie gives a tremendous performance, formidable yet bowed by Troy’s force, Rose’s plight and passion are truly moving. As her husband’s legacy is examined in the final act, it’s Rose you really want to hear from. Wilson leaves you wanting more – a sure sign of success.

Written 27 June 2013 for The London Magazine