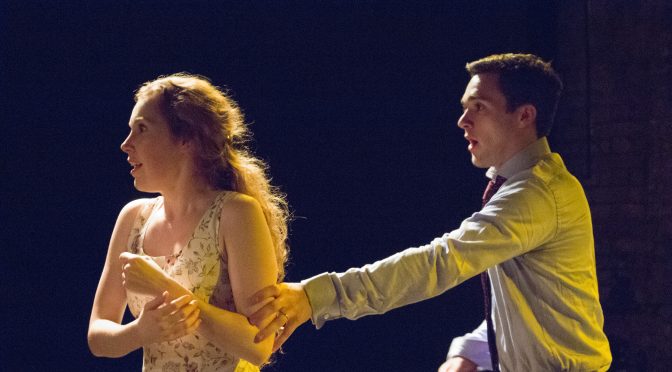 Director Paul Lichtenstern celebrates the centenary of Arthur Miller’s birth with a respectable revival of the master playwright’s first Broadway play. It’s probably fair to say this is a less well known and, overall, lesser work but, as the piece is so seldom performed, you should take a chance the see it. And even Miller before his best is way ahead of most writers.

Lichtenstern works dedicatedly with the script, drawing out the mileage Miller gets from his hero David’s blessed life: his luck in both marriage and work, how obstacles disappear and opportunities embrace him. Jamie Chandler takes on the role of this contemporary tragic hero and is clearly an actor to watch out for, transitioning eloquently from responsible young man to paranoiac – his fortune contrasts so profoundly with those around him that he obsesses that he will have to pay one day.

The strong surrounding cast includes Keith Hill and Michael Kinsey, playing David’s father and brother, with a dexterous sub plot about a baseball career that goes wrong. And Chloe Walshe, in a mostly underwritten role, deals superbly with the final scene when her character and David, now wife and husband, come closest to breaking down.

The play is overwhelmingly schematic – Miller termed it a ‘fable’ – but it’s constructed, or maybe it’s better to think of it as contained, with skill and sincerity. Lichtenstern appreciates the piece’s probity, attempting to question fate and autonomy alongside that old chestnut, the American Dream, and adding a superb score that he composed with Mike Smaczylo. That Miller’s concluding act is less satisfactory, coming too close to contrived, doesn’t take away from this production’s achievement.