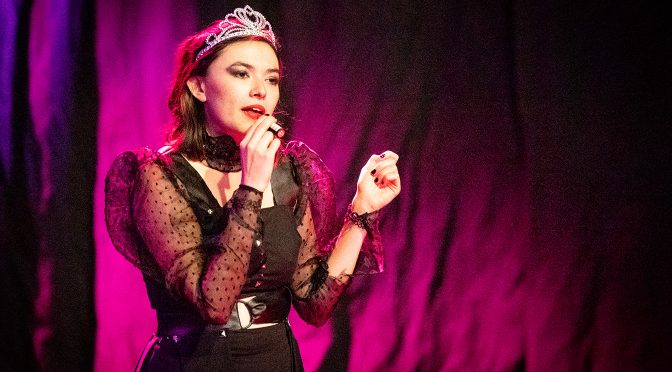 After a valiant effort to get back to normal last year, London’s biggest theatre extravaganza has finally returned, and I am very excited. Never mind the smell of the greasepaint, it’s street artists’ aerosol spray at the Leake Street Arches that herald a two-month long programme of exciting and varied events.

First up is a one-woman show, written and performed by Olivia Miller. And very good it is too. Ostensibly a stand-up comedy act, with Mary Tudor presented as an angsty teenager, there are smart ideas and the performance is strong. We know these re-evaluations of history are clever as well as fun… but Mary warns us that she isn’t a fan of the musical Six. Is it, after all, full of her wicked stepmothers!

There is a lot of audience participation in Bloody Mary: Live! The venue suits it and Olivia Munk’s direction makes the most of this. I’m not a fan but, even objectively, there’s too much “raise your hand if…”, as the technique is used to structure the show. That said, Miller deals with the audience superbly. You do know where a lot of the jokes are going to end (not just because of history) but they are always well delivered.

The highlight of all the participation is very clever indeed. It involves volunteers doing nothing – just like the powerful men who could have helped Mary and her mother. The scene has real bite as we get to see the character as a frightened young girl. Read as a conceit that the comedy show is therapy for Mary, formats slip and trauma start to feel real.

Miller has done her homework and wants to present complexity. As well as tackling that bloody reputation, there’s a feminist perspective, highlighting that Mary’s romantic life was not her own and bringing out lots details that kids would call icky. A nice balance is provided by an infatuation with her childhood tutor.

When it comes to that nickname, the persecution of Protestants shows how damaged Mary was. The line between teenage dirtbag and young psychopath blurs to dramatic effect. Laughs stop and start suddenly. Miller manages to create a chill in the air and that is to her credit.