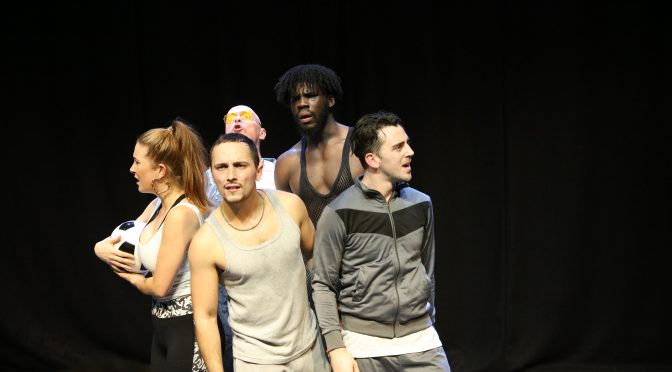 I’ve a soft spot for verse plays, so am predisposed to the “Shakespeare-inspired lyricism” in Elliot Warren’s piece about the poor in contemporary London. Such overt poeticising isn’t to all tastes, which makes it heartening to see audiences love the award-winning Flesh and Bone – making the piece literally exceptional.

Bluntly, Warren plays with syntax, adds choice quotes and puts in a lot of ‘eths. The language is blue, as well as purplish, and the invective needs to be more inventive. But you can tell the technique is well employed as it never gets tired. A gimmick? I guess. But the aim is to make us reconsider poverty and petty crime, class and gentrification, anew and the result is confrontational as well as entertaining.

Warren, with co-director and co-actor Olivia Brady (also credited with the story’s creation) have starred in a production of Steven Berkoff’s East and the influence is clear. Anthony Burgess springs to mind, with Warren’s character of Terrence reminiscent of a droog. And a scene of fighting with rats might have Philip Ridley as a source. All great stuff and well used.

You might want more plot, or at least more original story lines. Instead Flesh and Bone boasts strong monologues that have been shared out with equanimity… maybe to a fault. But all the cast members get a chance to shine.

Warren and Brady star as an onstage couple with terrific chemistry. Her role is the weakest written but the performance compensates. Similarly, strong turns from Michael Jinks and Nick T Frost, as family members, disguise that depth of character comes from skilful sleights of hand: the sex lives of both men shouldn’t really surprise us but, just in case, I won’t be a plot spoiler. The character of their neighbour Jamal is more interesting (his scene, entitled ‘Hellfire’, is one of many that makes this a script to buy) and Alessandro Babalola steals the show in the role, using his remarkable physicality and vocal skills to great effect. When the action itself isn’t original, Warren and Brady’s direction kicks in. There are few props and no scenery. Instead, the cast – working together brilliantly – shape the stage remarkably. This is first-class choreography.

Tackling the topic of inequality unfortunately results in political naivety. A sense of paranoia isn’t hard to spot. It pains me to write so contrary to the author’s intentions, but the characters are cast as victims. And yet, while the aim of giving voice to a class often denied one isn’t overwhelmingly successful, the attempt is more than laudable. These voices are alive, lusty and exciting… as well as thought-provoking. And the result is a show that’s a five star treat.