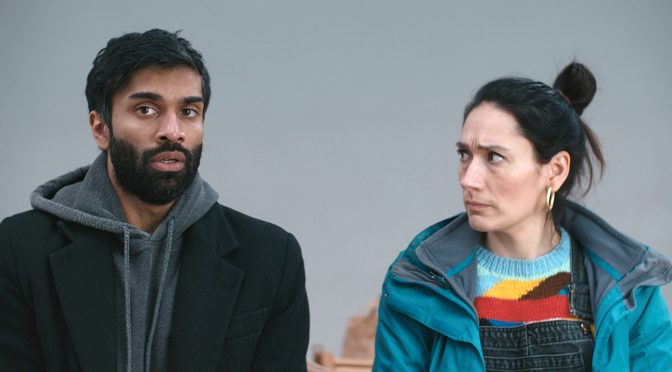 With director Natalie Abrahami on board, Lorien Haynes’ impressive new piece explores the impact of grief. With a naturalistic feel and fantastic attention to detail, there are wonderful performances, so it’s a show to enjoy despite the difficult subject matter. Nikesh Patel plays Adam, who has lost his wife Liv to cancer, and Sian Clifford takes the role of their friend Cat. Both performances complement the strong observations in the script.

Clifford has called the mix of play and film a “plilm”. I respectfully disagree! It’s filmed in a studio space with the simplest of props, and captions introduce the date and location of each scene, but Abrahami brings the theatre to the screen better than most. There’s an air of a successful workshop, of rehearsals freshly completed and a real feel of the theatre – just what I need right now, thank you.

Good Grief has shortcomings. Firstly, while injecting humour is a fine idea, the jokes aren’t good. The humour isn’t dark or original enough. This becomes an increasing problem as Adam is supposed to be funny. With “always a joke” to hand, some of them need to land.

The friends’ relationship is established and developed well. Aided by the performances, both characters are made appealing and they are recognisable. It’s not much of a plot spoiler…

…to say that Adam and Cat end up sleeping together. But this raises another quibble. Much of the drama comes from how shocking you find the sexual element or how convincing the subsequent guilt is. Maybe a stronger sense of their community might help? Other friends are mentioned and what other people will think is questioned a lot. But the idea of the close-knit, well-to-do clique they belong to is vague. Neither seems to like the other people in their lives, so why should they bother what they think?

Haynes gives due weight to both characters’ mourning – it feels important to note that friends grieve as well as partners. There’s real insight here. Even more impressive, while Good Grief is a tear-jerker it never feels emotionally manipulative. The temptation, for a writer, must be strong. Admittedly, there’s a posthumous letter from Liv that makes a pretty harrowing scene. But Haynes holds firm to give us a candid picture of grief that rings true with its realism, and is both moving and intelligent.

The history and politics of the Indian Partition may be messy as well as tragic, but this play about the five weeks leading up to independence by Howard Benton, first seen in 2014, is a neat one. The “impossible task” of dividing a subcontinent and the creation of Pakistan is made into a traditional, efficient and fascinating drama.

The sensible move is to make such a global event a personal story, focusing on Cyril Radcliffe the judge who literally drew the lines on the map. It makes a starring role that (the sadly late) Tom Beard shines with and gives the audience an effective focus. Beard makes a fine narrator with a character that’s engaging and self-deprecating. There’s a believable touch of ego behind a likeable man. That this unusual innocent abroad knows “bugger all about India” is historically awful, but it endears him as a dramatic character. As pressure mounts Beard gets better and better, showing Radcliffe’s vulnerability and determination. As it dawns on him that that he is a “patsy”, and a lonely one at that, we are shown an honourable man it is hard not to feel for.

There are problems with the other characters – a collection of famous historical figures – that the cast struggles with valiantly. While the future Pakistani leader Muhammad Ali Jinnah (Silas Carson, pictured top) comes across as too manic, Indian’s first Prime Minister Jawaharlal Nehru is too much the consummate politician. Louis Mountbatten, last Viceroy of India, and his wife are given a lot of work to do and, while Andrew Havill and Lucy Black give strong performances, it’s difficult to care about their characters. The staff helping these (too self-consciously) political giants prove more interesting: there is strong work from Nikesh Patel and Brendan Patricks, whose characters work for Radcliffe but have partisan agendas and follow their own consciences.

Benton generally keeps anecdote to a minimum with some surprisingly light touches. With Howard Davies’ skilful direction, the action is clear and interest never flags. Davies also excels at creating a sense of tension with minimal staging or effects. The only slip comes with Radcliffe’s reading of the Bhagavad Gita, a potentially interesting thread that seems bungled, with a brief appearance by Krishna himself.

Understandably, Drawing the Line struggles for a conclusion. The aim of an “honourable end to Empire”, given hindsight, can’t create much tension. But Brenton isn’t scared of scandal or conspiracy and he uses both well. There’s the militant Gandhi and the Mountbattens’ private lives to spice things up. How much both really influenced or could have changed events seems open questions: flippant as both titbits may appear, they make for good theatre.