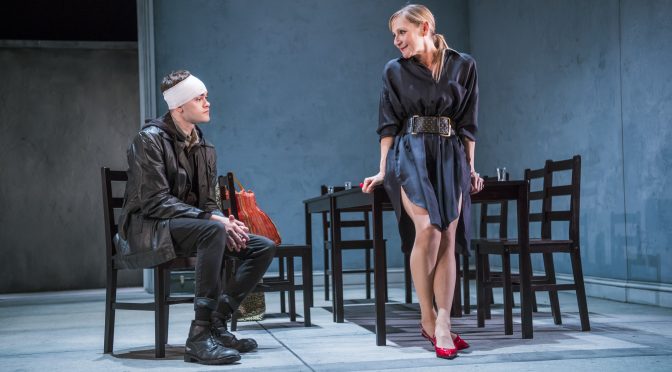 Simon Stephens is a busy man. This week his play Heisenberg received its UK premiere and his new version of Anton Chekhov’s classic has opened. Dauntlessly tackling the 1895 piece, full of unrequited love triangles, the passion and depression in the original comes into focus. There’s no period frippery – not a samovar in sight – no agendas and the sometimes ponderous discussions of Art (capital A) feel unforced. The language is efficiently modern and startlingly down to earth: “get a grip,” says one character. Stephens has grabbed Chekhov ferociously.

There’s plenty of fresh insight and energy all around, abetted by Sean Holmes’ direction and a strong cast. The production is marked by direct addresses, admittedly not all successful, that illustrate a determination to engage the audience. Brian Vernel’s Konstantin has an indie rock star vibe (despite the classical mix in the show’s excellent soundtrack) that makes him feel modern. His unrequited love, Nina, gains a similarly contemporary touch from Adelayo Adedayo’s performance. The character is desperate for fame, fame, fatal fame. But when that dead seagull is presented by Konstantin in a plastic bag she wallops him with it: good girl! Getting in the way of their love, Nicholas Gleaves plays the writer Trigorin with a dash of aloof celebrity that aids the coherence and relevance of Stephens’ approach.

The real star of The Seagull is the actress Irina, and Lesley Sharp grasps this part magnificently. While her desperate love for Trigorin is clear, and explicitly depicted, the production calls for her comic skills and Sharp delivers. This snobby Sloane gets laughs for every “darhling” she utters. There are a lot of laughs all around in this production, with the play’s many characters each getting a turn, as desires battle with a cynical cruelty that’s surprisingly funny. Stephens has a great eye for eccentricity and the crazy things this boho crowd gets up to. As the depressed Masha, renamed Marcia with an impressive performance from Cherrelle Skeete, observes: “People are just odd.”

Humour is maintained for a long time. I suspect it might annoy some people. But we know The Seagull is a tragedy and changing key is Holmes’ biggest achievement. For the final scene, mental health issues come to the fore. We see how obsessive, in their own ways, all these characters are. A lot of anger is revealed and not just in the case of our young lovers. The delusions and detachments we’ve been laughing at become dangerous amongst such fragility and an acute sense of the toll time has taken on all. Stephens appreciates the complexity of Chekhov’s vision and has orchestrated it in a new and exciting manner.