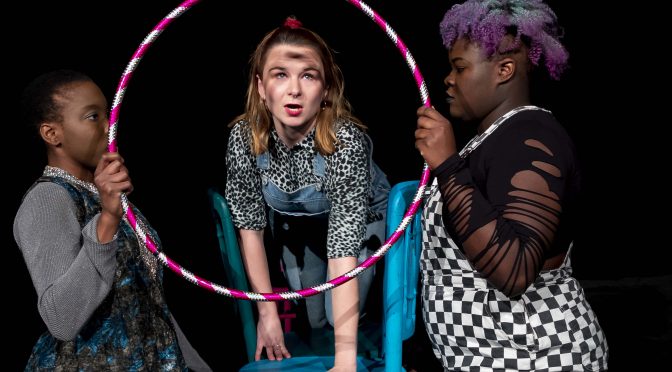 Those who serve at the National Theatre have created a chance to reveal their other talents with their own company that shows us what they really want to do. Along with several productions under their belt, a night of new writing is becoming an annual event. There’s undoubtedly a friends and family feel – it’s a bit like gate crashing a good party – and an atmosphere this supportive has a special attraction.

The first half of the evening presents three short plays that struggle with their time slots. Gavin J Innes does best with his two-hander, a scenario of a drugs test for an athlete, which works well as a sketch. The next two efforts, Solicitation Games by Carl Blades and Selfhood by Aaron Gordon, take on bigger subjects – sex and race – and have lots of ideas but fall down when they introduce third characters, despite the valiant efforts of the performers.

Innes also directs his play. Along with Neil Gordon and Elliott Bornemann, who take charge of the other two, there is a common flaw here (easily corrected). Each play is just a little too slow: laughs laboured, drama drawn out, so problems in the scripts are elaborated rather than eased over. And it should be noted that quieter performances often have more impact: Omar Austin does well as the ‘Zen’-like character caught between two feuding sisters in Selfhood.

On to the second half. Michael Ross’s Brutalism, set in a high-rise block and concerning gentrification, shows writing of the highest quality. Not a line is wasted, and the lead, Amy Beckett, knows it –she has great fun with the comedy in her role as a social worker-turned-propertydeveloper. It’s a delicious conceit that makes you want more. The twist is a surreal one that could have real bite. But it arrives too quickly, leaving the feeling of a fuller play truncated and puzzling. To end the evening on a real high is I Heart Mary by Emma Bentley. Director Courtney Larkin is full of ideas, while a trio of performers – Mauricia Lewis, Olivia Seaton-Hill and Tricia Wey – is boosted by the crowd. The trick is simple: this a sketch about working in the customer service industry. Plenty of jokes ring true and hit home, while the frustrations are depicted sincerely and the piece doesn’t patronise. Preaching to the choir maybe, but it’s contagiously effective.