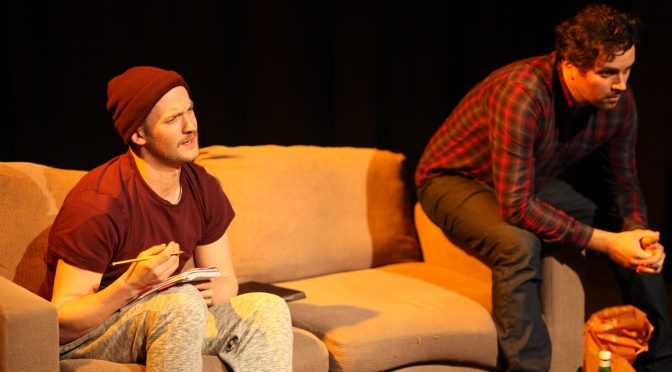 This meta-theatrical sketch makes a neat and sweet debut for its writer Karrim Jalali. Along the way you might think it’s about friendship, documenting the bromance between two young men. Or that it concerns creativity, with a debate about art and the sacrifices it requires. But the text itself is adamant: it’s simply two mates talking about making a play and retelling events that have just happened. One guy thinks he’s had a genius idea. The other wants to set him straight. There’s your theatrical conflict and, with the help of two great actors, this clever little notion is handled superbly.

It’s admitted by the performers that there’s no action or plot. And explicit that a story is only being played with. Pointing out potential flaws, along with the suggestion that doing so is a defence for the writer, gets a lot of laughs and brings us closest to Jalali’s aims. The play is full of games, both smart and silly, double bluffs and downright nonsense, that added together with charm make The Last Will and Testament of Henry Van Dyke five-star smart and funny.

There are plenty of plays that reference the theatre and many of them are mentioned here. But what sets Jalali apart is an openness and sincerity that’s especially appealing. It’s nice that he’s done his homework but, more unusually, he’s careful not to show off about it. Much of the affable mood created can be credited to Joy Harrison’s snappy direction – there’s no doubt talk of structure and theory can get dry quickly and she prevents this. But the wonderful intimacy shared between these friends, carefully avoiding any suggestion of a theatrical clique, comes down to the excellent, warm performances of Nathan Wright and Niall Murphy.

That the characters don’t have names is one in joke that annoys – will writers please stop doing this. But this odd couple are completely believable as old friends, their comic timing helps Jalali immeasurably and they become guys you’d want to hang out with. Nathon Wright’s Person 1 is a wonderful mix of enthusiasm and lethargy. Niall Murphy’s Person 2 is full of geeky facts with a healthy suspicion of any urban legend. They are both funny and approachable. Ultimately a lesson is offered, contrasting too narrow a definition of creativity, which Murphy’s character punishes himself over, with Wright’s role showing the way. In art, just trying does count for something; writing any play is an achievement, it’s something brave. There’s an appeal to the audience that’s heartfelt and endearing. Another stab at being critic-proof? Maybe, but I’ll for fall it.