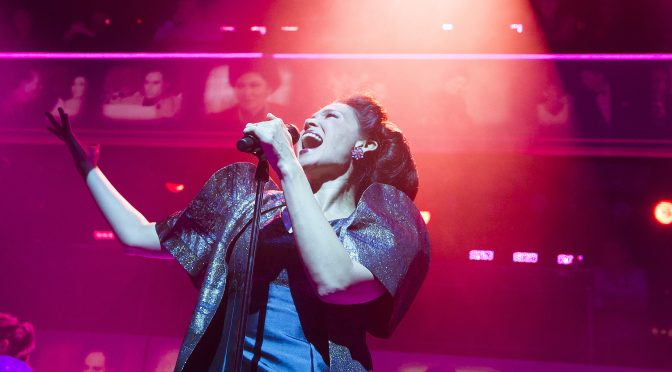 The National Theatre’s gone all trendy. Passing the new, stylish Understudy Bar, to the swanky refurbishment of the Dorfman (formerly Cottesloe) auditorium, you can see that plenty of money has been splashed around. And the first show in the renamed space is just as startling: a musical ‘experience’ by David ‘Talking Heads’ Byrnes and Fatboy Slim (aka Norman Cook).

To be fair, the National does its best to embrace all kinds of work and this production comes from New York’s Public Theatre. Here Lies Love is so achingly ‘out there’ it could annoy, but there’s a stubbornness to do something different that wins admiration. Something this fresh, almost innocent, has its appeal.

Byrnes and Cook aren’t known for musical theatre, rather their iconoclastic approaches to pop music. Here Lies Love is about Imelda Marcos – yet there’s no mention of her infamous shoe collection. It’s a story of revolution, like other notable musicals, but the Philippines People Power Revolution was a peaceful one; a truly inspiring story, but not automatically the greatest drama.

The dance music works surprisingly well with dramatic political events that call on the crowd. But the beat fails to deliver when a song aims for emotional sincerity, creating bathos instead. A DJ, played by Martin Sarreal, presides over events, but it’s notable that his finest moment is with an acoustic guitar rather than at a turntable.

The show is a collection of songs rather than a true musical – which is interesting, but creates some problems. Exposition comes from signs and voice-overs rather than the songs. Lyrics aren’t strong but occasions when real life transcripts are utilised are gripping. Imelda’s rags to riches story isn’t exactly wasted but it isn’t fully explored either. What depth the characters have comes from the performances.

And the performances are fantastic. Seldom have I seen such an energetic cast on stage, nor, incidentally, such a good-looking one.  is stunning in the lead role, making Imelda an unexpected heroine and a suitably magnetic figure. Imelda’s love interests, first the aspiring, later rival, politician Ninoy Aquino (Dean John-Wilson) and then her husband Ferdinand (Mark Bautista), both have great stage presence. All can sing and dance powerfully well – and that’s no mean feat when you are running a country at the same time.

The staging is remarkable; a huge technical treat, forcefully directed by Alex Timbers, with special ushers to marshal the crowd around a rotating stage. All this immersion is so fashionable it can seem tokenistic, but if it’s your thing you will dance and sing along. There’s a lesson in line dancing – and don’t forget the Philippines invented karaoke. Here Lies Love almost lives up to its tag line of being ‘revolutionary’. Despite connections to other musicals and theatre trends, it’s not quite like anything else – which is a pretty strong recommendation.