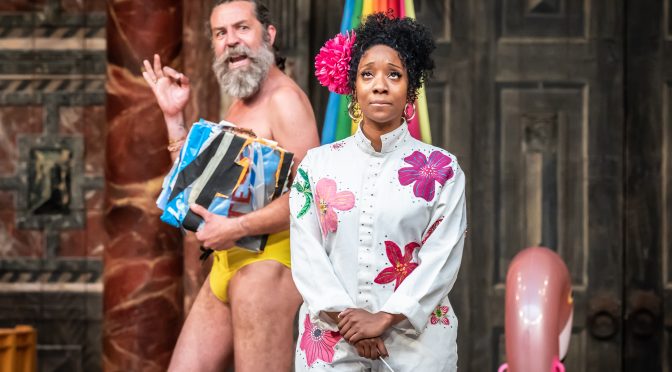 Sean Holmes’ new production of Shakespeare’s late work puts forward the comedy and romance in the play. With eye-catching, crowd-pleasing touches, this tempest is light and fun.

The storm that starts the play is brief – it looks good but I barely heard a line. The magical island the action happens on is akin to a holiday resort, populated by inflatables and palm trees, with Prospero and Miranda sunning themselves. Caliban is the staff – he even has a badge.

So, lots of silliness and not much time for the scholarly debates that surround the play. Instead the productions strongest moments come with getting laughs. There’s a fine Trinculo and Stefano (Ralph Davis and George Fouracres who make a great team). And unusually, Ciarán O’Brien’s Caliban gets laughs. Peter Bourke makes the pompous Gonzalo funnier that I’ve seen before.

The humour is hard work though – the comedy effortful. And it isn’t particularly original: including the crowd is something directors at the Globe can never resist and it seems a pop song in Shakespeare is obligatory (even if the selection of Three Lions is topical). The jokes land and a lot of additions (delivered in an adlibbed style) are good. Yet it is Rachel Hannah Clarke’s Ariel who stands out for being understated and still funny. The irony that Ariel grounds the production is, like Clarke’s fantastic performance, the subtlest thing in the show.

The play’s romance is strong too. Miranda and Ferdinand (Nadi Kemp-Sayfi and Olivier Huband) make a sweet couple – they get giggles as well. But the price paid for the fun is predictable. There’s little tension or suspense. And when Holmes tries to do more than have fun, the production stumbles. Take the masque scene for the newlyweds (always tricky): any suggestion of challenge is lost in laughs. The production’s high spirits mean the supernatural in the play is only a side show.

Ferdy Roberts’ Prospero is still interesting. This mage is more than a touch mad and Roberts manages dignity despite spending much of the show in Speedos. But the idea that Prospero is enjoying his revenge becomes overpowering. When depth or emotion is needed, despite Roberts’ skill, it jars. A partying Prospero just doesn’t work – while the execution here deserves praise, the idea does not.