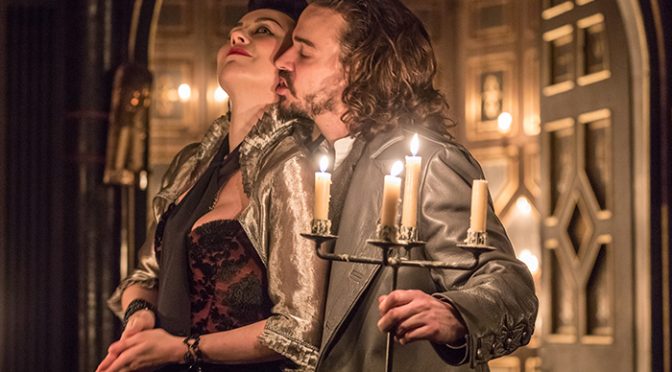 John Webster’s play is a textbook Jacobean revenge tragedy, circling around an adultery that engenders murders in Italian courts riven with plots and poison. It’s a play about rage and, with emotions boiling (it’s lust not love on offer), needs the strong hand provided here to create a rollicking evening that should satisfy any bloodlust while providing plenty to think about.

Director Annie Ryan shows no qualms about dealing with Webster’s text. Tidying up, with the help of Michael West, the poetry is retained while twists and turns in the plot are treated with ruthless efficiency during a swift two- and-a-half hours. There’s no sweetening the disgusting misogyny. With ahistorical steam punk touches to a scene of sorcery (“quaintly done”, indeed), there’s the warning that prejudice and violence are a perennial threat.

It’s satisfying that a policy of balanced gender casting works so seamlessly. Kate Stanley-Brennan shines in her starring role of Vittoria, particularly in the scene of her murder trial, a riveting combination of indignation and cunning. And it’s good to see Shanaya Rafaat doing well as the servant Zanche, with a writhing physicality that terrifies. Also gratifying is the part of Vittoria’s young stepson, which cleverly uses the skills of Mollie Lambert.

Perhaps Ryan’s embrace of Webster’s black humour is her biggest achievement. Incredulous moments are made funny – we’re going to laugh anyway – with the instant calls for revenge dealt with superbly by Jamie Ballard’s manic Bracciano. This adulterous, murdering Duke isn’t the only engaging villain on offer. Indeed, even the single sympathetic character, Vittoria’s “virtuous” brother Marcello (a good turn from Jamael Westman) falls victim to his own impetuous anger. His fate provides a pause for thought and pace, with the play’s one moment of compassion boldly handled.

Ahead of the plotting gentry and papacy (a great role here for Garry Cooper as a suave clergyman) is Flamineo, delivered with spectacular charisma by Joseph Timms, whose energy and impeccable delivery garner laughs and excitement. Timms makes his pandering and posturing crook the arch evil in a play with no shortage of demons. There are devils all around, a bewilderingly “catalogue of knaves”, and Ryan deals with them all brilliantly. Her patience with the play is truly saintly.