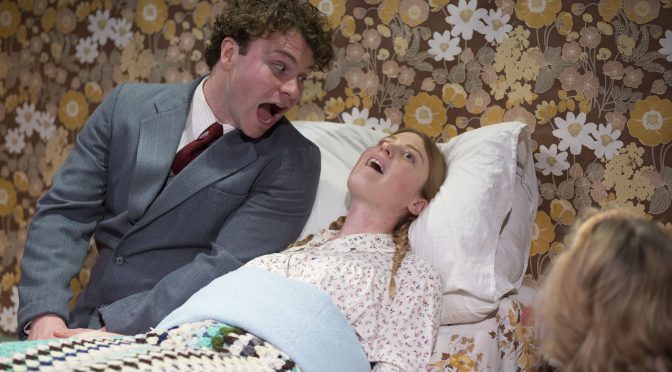 Here is a real find on the fringe. Many a larger venue might have considered a 40th anniversary revival of Dennis Potter’s landmark play, but director Matthew Parker has beaten them to it and can bask in the glory of his superb production of this brilliant piece.

Potter’s scenario has a severely disabled girl, tended by her desperate parents, visited by evil. It’s a remarkable performance by Olivia Beardsley as Pattie, the bedridden victim of a hit and run who’s unable to speak yet communicates frustration and fear. Pattie’s father regards her as dead. The alternative – that she is “locked in” –is just too frightening for him, but the possibility that she is sentient haunts the play.

Both Pattie’s parents are struggling. Her mother, a house-bound full-time nurse, is played to perfection by Stephanie Beattie, who combines her wretchedness with humorous touches. The talented Paul Clayton plays the father, an objectionable figure who’s close to parody. Clayton invites us to take the character seriously, while glimpses of his love and regret are tender without being mawkish. The couple’s flirtation with right-wing politics makes Potter visionary – the yearning for isolationism and a past where people “did less sniggering” – gives us plenty to think about in 2017.

It’s with the character of Martin, played here by Fergus Leathem, that Brimstone and Treacle becomes unforgettable. He is a visitor claiming to have been Pattie’s fiancé. First comes nervous laughter at supernatural overtones, then chills with his monotonal singing and glances to the audience, culminating in truly shocking abuse. Parker’s staging of all these levels of discomfort is handled brilliantly, destabilising the audience and aiding the tension in the text.

This suburban Satan may have a Rosemary’s Baby plan in mind. But he is also a common conman and out of luck crook, all combined to make him a catalogue of fears. There’s a twist, too – a sin that has nothing to do with him revealed as a last disorientation. Fully developing Potter’s nuanced play, without denying dangerous edges and firmly establishing it within its period, are all big achievements for this tiny theatre. With four performances as good as any you could see on a stage, this is one to grab a ticket for… quick. 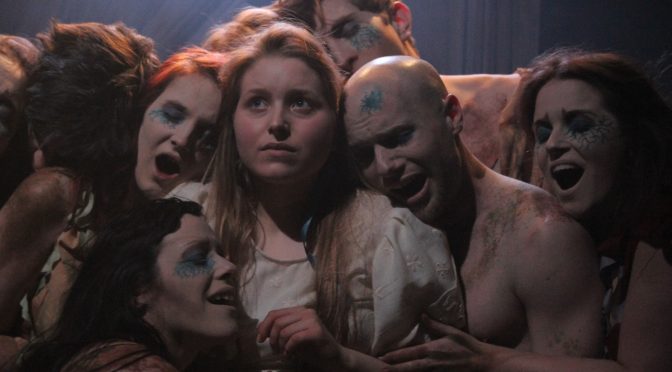 J M Barrie’s 1920 ghost story Mary Rose feels like a very Victorian affair, as it comes from an age when people investigated the paranormal ‘scientifically’ and theorised about “strange and inexplicable” matters. In Matthew Parker’s new production at the Riverside Studios, such ideas are presented well; the sound of radio waves and the flash of photography echo research into spectral presences. This is something different from the average chills and thrills ghost story and makes an interesting and refreshing change.

For our heroine Mary Rose, the world is full of ghosts but, even when they abduct her, they aren’t that scary. As the story travels through time, including a visit to his former home by Mary Rose’s son, we might get a goose bump, but this is really a story not of horror but about loss. Parker has a large group of mourning spirits accompanying the action. They sing and dance to composer Maria Haik Escudero’s score and even help to change the set – which is at least useful. The execution of the ensemble leaves much to be desired as the bizarre movements become so laboured that they break the spell of what could have been an intriguing idea.

When the ghosts are absent, Mary Rose styles itself as a gentle drawing-room comedy. Again there are problems with the older cast members playing this too broadly but the leads manage a slightly mocking tone well. Jessie Cave, of Harry Potter fame, brings her considerable talents to the challenging title role, embodying Mary Rose’s otherworldly quality wonderfully. Carsten Hayes plays her fiancé, who develops nicely from a “larky” young man into an abandoned husband. These performances are impressive. As are Parker’s admirable ambitions for the show. Despite its flaws, Mary Rose manages to rise above the level of a period curiosity.

Written 2 April 2012 for The London Magazine