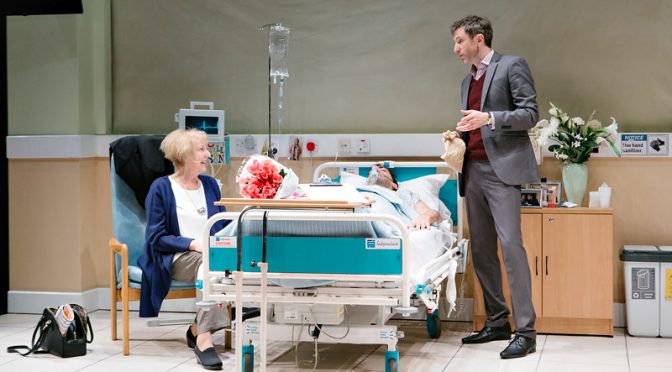 Peter Quilter’s new play is summarised as a story of “accident, coma, memory loss, vandalism” and shows a recovering patient, torn between trauma, his mother and his lover. The intriguing twist is that Michael, the victim of a freak cerebral haemorrhage, can’t remember the last decade or so – the whole time with his partner Paul – a fact his mother aims to take advantage of.

4000 Days is well performed. Daniel Weyman gives a sensitive portrayal as marketer Paul who, it’s revealed, has attempted to control Michael over the years, stamping on his potential as an artist. This is partly the reason Michael’s mother Carol, played by Maggie Ollerenshaw, hates Paul. Carol “reserves the right to be very disappointed” and Ollerenshaw delivers this blunt-to-the-point-of-brutal, age-induced cynicism perfectly. The tension between Paul and Carol is palpable. It’s taken a coma to get them in the same room, where they fight and even make a competition of the flowers they bring in.

Last but not least, Alistair McGowan renders the role of waspish Michael, who’s recognisable, realistic and far from appealing. Fans of his comedy work beware – McGowan gives a serious and studied performance, stubbornly reining back the script’s wry humour: the pay-off is a nuanced character who raises the issues and observations about relationships Quilter wants to explore. Still, although skilled, it seems odd that all three performers actively stop the laughs landing.

There are nuggets of wisdom and plenty of questions here, if delivered somewhat flatly. Should Michael take the fresh start his mother wants for him or try to recapture, even improve, his relationship? Catching up on what’s happened in the world over the last ten years is a dead end for the play. And similarly the potential drama around what is, after all, a life-threatening condition is not exploited. The overriding problem is director Matt Aston’s slow and static approach, stretching the script to breaking point with a delivery that’s just too lethargic. Nice premise, shame about the pace.