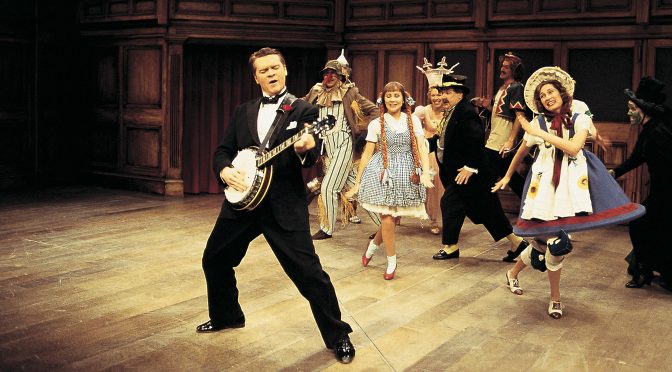 Far from Andrew Lloyd Webber’s biggest hit, with a complicated history of rewrites, you might think this week’s digital offering – as usual aiming to raise money for charity – is merely a curio. But this PG Wodehouse-inspired piece, with a lot of talent behind it, makes for diverting entertainment, and Webber’s enthusiasm convinces, even if it isn’t contagious.

The book and, even better, the lyrics come from none other than Alan Ayckbourn. Of course, success depends on how much you like Wodehouse (and I don’t). But the crazy capers of the archetypal nice-but-dim toff and his superior butler are true to the spirit of the original. The story of mixed identities and confused romances is well explicated. And those lyrics are the height of sophistication and silliness – again, the perfect reflection of its source. Let’s just say that Wittgenstein is one of many unexpected rhymes.

There are problems. Ayckbourn also directs, and he does so far too slowly. It takes an age for things to get started and the pace doesn’t pick up enough. The songs are good but there aren’t enough of them and, on a couple of occasions, their inclusion seems almost random. The jokes, too many of which revolve around on the conceit of Bertie putting on a show, are too predictable.

The recording offered is based on the production from Pittsburgh’s Goodspeed Opera House and dates from 2001. Cleverly, the show’s small scale is reflected well. And the cast is top notch. John Scherer is appropriately bumbling as Wooster and sounds great. While Jeeves, who only has a speaking role, is performed by Martin Jarvis, who makes the whole thing look so effortless, he could be filming something else when he’s off stage.

The show’s stronger scenes go to the women, in the roles of Honoria Glossop, Madeline Bassett and Stiffy Byng, resulting in strong performances for Donna Lynne Champlin, Becky Watson and Emily Loesser. The men, you see, have the “combined IQ of 42” and, while this is supposed to be increasingly funny, it ends up tiresome. Maybe the show could have been even more knowing? When Ayckbourn and Lloyd Webber let go it improves. A crazy finale provides a highlight: ‘It’s A Pig’ about, well, a housebreaking hog, is so odd I’m glad I’ve seen it… even if just the once.

Available on The Show Must Go On! YouTube channel until 10 May 2020