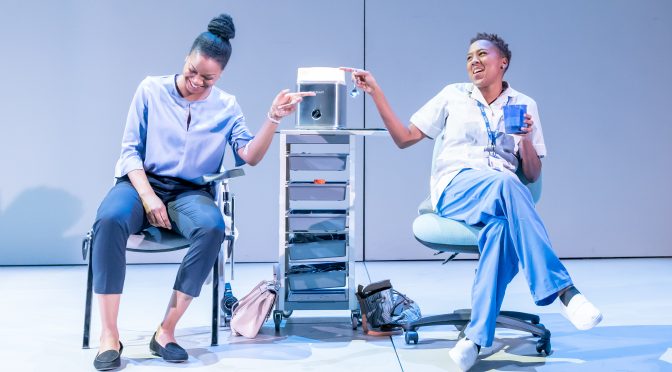 There is a great excitement around playwright Ella Road and her first impressive play. After a sell-out premiere last year and a transfer from the venue’s studio space into the main house – with an Olivier nomination under its belt – congratulations are in order. Road’s ear for dialogue is sure and the production strong. It’s a shame that control of the subject matter is lost in this sci-fi romance. Ultimately, the genre ends up manipulating the writer, rather than the other way around.

The scenario is that a system of genetic ratings based on blood tests changes our not-too-distant future. Road has no shortage of ideas, and a series of films crowds the show with news reports or fake adverts. But none of this is particularly novel or hard to foresee, so the play as a whole becomes predictable. While the testing is initially to assist in healthcare, its application in jobs, dating and then eugenics appears quickly. Each could be the focus of a play in its own right but, crammed together, the topics feel thinly explored. There are too many questions and some silly inconsistencies, while tacking on environmental concerns doesn’t help either. There’s a reason sci-fi has so much detail – without the geeky touches, the future world we find ourselves in fails to convince.

Road escalates outrage at a steady rate but with little change of pace in the structure of her scenes, so the show feels slow. By the time we’ve got the legalisation of “post-natal abortion”, attempts to challenge the audience feel more than desperate – they are naïve. Tasteless or provocative? That might depend on your view of human nature. But it seems fair to suggest it’s a dramatic own goal to curtail a plot about the fight again “rateism” so quickly. Only one figure (and a couple of news snippets) attempts to challenge this nightmarish system. A subplot about dealing in blood is carefully contained as a matter of financial corruption. The characters are worryingly lacking in morality or even agency.

For all the problems with the plot, the production is good. Road benefits from ambitious direction from Sam Yates and a superb cast that laps up her well-written lines. Mark Lambert makes for an intriguing impartial observer in his role as a hospital porter. Kiza Deen does sterling work as a protestor who develops Hodgkin disease during the course of the play. The Phlebotomist is essentially a love story between Angus – played by Rory Fleck Byrne, who reveals his character marvellously – and Bea. She holds the occupation that gives the play its title, and the role shows Road’s strengths. A brilliant performance from Jade Anouka – who demands both our sympathy and revulsion – makes her the highlight of the night.