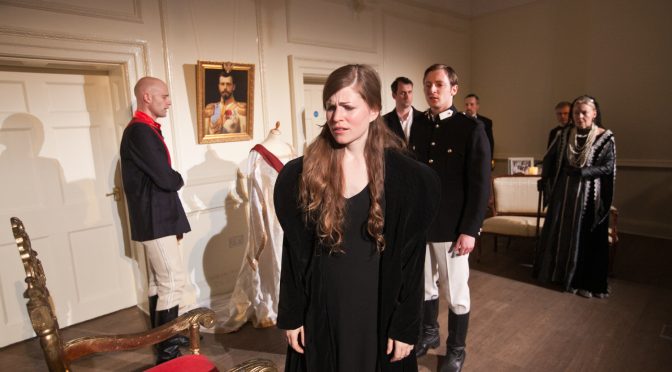 When the Bolsheviks massacred the Tsar and his family, they knew that any trace of the corpses would cause uproar. They took dramatic measures – not just burning the bodies but covering them in acid. Therefore, when someone claiming to be Anastasia, one of the Tsar’s daughters, is presented to the world as a survivor it captivates imaginations worldwide. Marcelle Maurette’s play uses all the dramatic potential of the tale, presenting a moving human drama.

The play begins as a thriller, with conspirators plotting to present an unknown girl as the Princess. We see her cruel recruitment and then trial by interview as various members of the Russian émigré community challenge her identity.

However, the triumph of the show is the role and performance of The Girl said to be Anastasia. Alice Bird takes the transformation from pauper to princess in her stride. The real achievement is presenting such an unstable enigma. The trauma experienced and the power of the dreams Anastasia provokes are dangerous to all. And there’s a twist you won’t see coming.

Sellers secures fine performances from her large cast and utilises them in tableaux that evoke harrowing scenes of murder. They are just a memory, part of the real Anastasia’s story, but seem so real to the “small world” of the Russians in exile. The production benefits greatly from its location: Pushkin House, a Russian cultural institute based in a beautiful townhouse in the elegant Bloomsbury Square, that is a perfect match for this sophisticated and intelligent play.

Written 3 April 2012 for The London Magazine