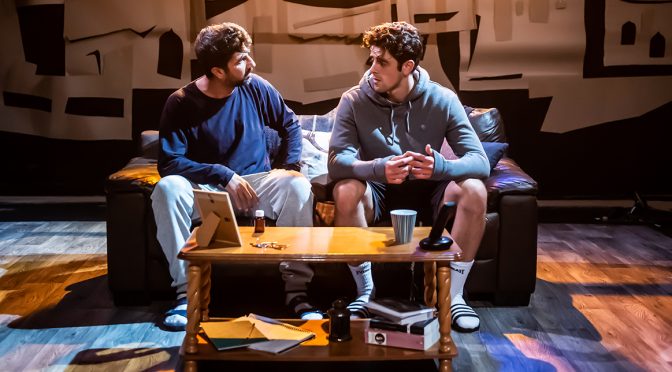 Mamet Leigh’s neat new play has a father and son taking “time to talk”. In just an hour, Baba and Bashir, admirably performed by Aso Sherabayani and Joseph Samimi, discuss their deceased wife and mother, their lives in the UK and their future. What preoccupies the young Bashir is their past in Egypt. That his father is just as keen to avoid family history sets up the drama nicely.

The relationship is tentative at first, with a nervous teen and an anxious parent who quickly endear themselves to us. Director Majid Mehdizadeh builds tension in a fashion appropriate to the strong detail and sensitive touches of the script. And there’s a plot twist regarding Baba’s health, which becomes increasingly effective as the play goes on.

Baba’s soliloquies, directed at his wife’s photograph, are less convincing, and Sherabayani struggles in these difficult scenes. Leigh also stalls before the play’s finale – it’s too much of a surprise to hear Baba accused of being “full of hate”. Generally, though, the characters are interesting, and the controlled performances make for a fine study.

But a study of what? While Bashir wants to talk about Egypt – and even return there – Give Me the Sun says little about the experience of immigration: Baba is too tight lipped, and his son’s second-generation experience isn’t detailed enough. The play’s appeal is broader, and it is as a family drama with generational conflict that we see its strengths.

Does Baba withhold too much? Surely working in Tesco rather than as the doctor he is qualified to be, as well as rejecting his culture with such determination, needs more explaining. Or is his son too harsh? It’s easy to see Bashir romanticising the past and speaking from a position of ignorance. But whose fault is that lack of knowledge? Leigh’s concern for the younger character’s identity politics and the elder’s resistance to this are a worthwhile contribution to an ongoing debate.