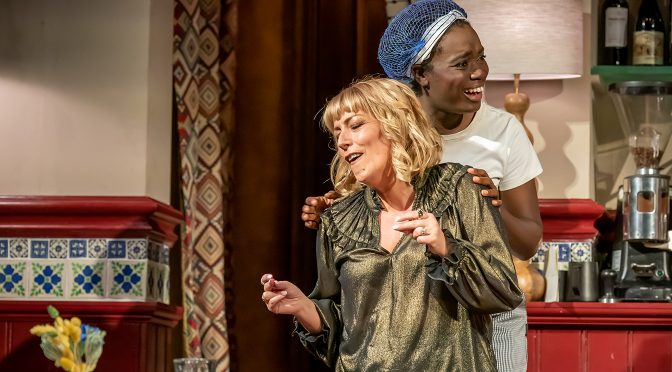 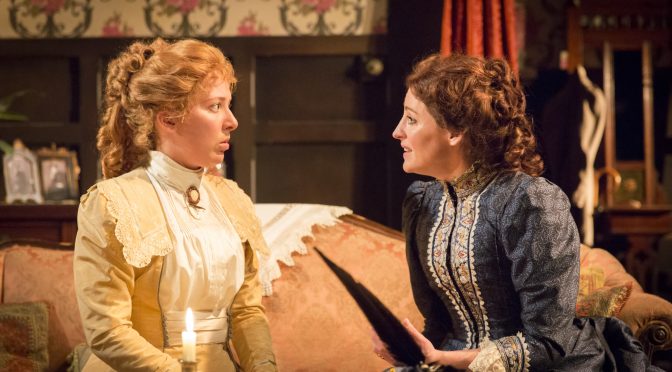 Set in the late 19th century, its saucy starting point is the historic practice of using electrical, ahem, instruments ‘down there’ to induce what were termed ‘paroxysms’. It’s guaranteed to generate giggles, but showing how medical discourse generated its own clientele (the procedure was to resolve the complaint of hysteria), a deeper discussion about relationships between the sexes comes to the fore.

This is another production to arrive at St James from the Ustinov Theatre in Bath. It confirms both venues as exciting locations. Directed with care by Laurence Boswell, the design from Simon Kenny focuses attention on that glorious new discovery – electricity – which revolutionised work and home. For the Givings, the couple at the centre of the play, the two are combined: the Doctor’s surgery is ‘the next room’ in his house, in which patients are satisfied in a manner denied to his wife.

In the lead roles, Natalie Casey and Jason Hughes give fine performances as a man of science and his wife, driven to desperation mostly, it would seem, through sexual frustration. The doctor’s patient, Mrs Daldry, has a similar complaint, depicted with great fun by Flora Montgomery. And lest we should suspect Ruhl is simply recasting a Victorian malady, suggesting sex is a cure-all, there are the deep pains and joys of childhood to consider. The better-off woman’s fears and anxieties are brought into sharp relief by the employment of a wet nurse whose own child has just died. Madeline Appiah does wonders with this small role.

This is a chance for London audiences to see the work of a new, much feted American writer. Well constructed, with a light touch underlined by some deep thinking, it has possibly too many twists; including what happens when there is a power cut and the arrival of a male patient (now that’s got you thinking). Some predictable touches commenting on a battle of the sexes fail to satisfy. The play is impressive for its commercial potential as much as a sense of integrity. Ruhl may try to tackle a little too much but the laughs are uproarious and the romantic ending a delight.