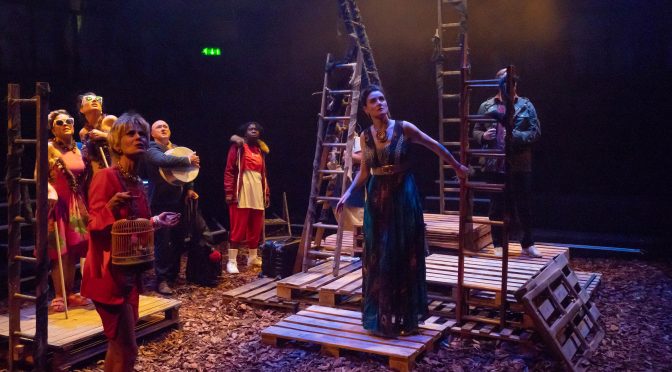 Stephen Sondheim’s grown-up musical about fairy tales is an undisputed modern classic. Any chance to see this marvellous piece, with its super smart book from James Lapine, crammed with Sondheim’s wit and wisdom, as well as some of his best music, is worth a punt.

Tim McArthur’s version of the show has “updated” touches that rethink the story-book characters with an eye on reality television. So the wicked step-sisters could be on The Only Way is Essex– fair enough, given that the show’s premise mixes and matches stories so blissfully. But the idea adds less than presumably intended, since the sensibility of the piece already suggests modernity. And some of the performers seem trapped by the idea of contemporary characterisations and need to relax; especially Jack and his mother (Jamie O’Donnell and Madeleine MacMahon), said to come from the Jeremy Kyle show. But beneath this veneer lies strong direction: McArthur knows what he is doing, showing a clear understanding of every scene, indeed each line, making the show swift and coherent, as well as suiting this in-the-round venue. When the whole cast comes together, the production is impressive.

There are some uneven individual performances, with less than first-class voices unaided by problems with the sound system. But there are good turns from Abigail Carter-Simpson as Cinderella and Louise Olley as Rapunzel. Director McArthur takes the role he identifies as central – that of the Baker. His performance is surprisingly flat, his stage wife, played by Jo Wickham, more enjoyable. The production is not as funny as you would expect – and I’ve a suspicion this is deliberate. When it comes to the loss of loved ones and fears for the future, McArthur comes into his own (alongside Michele Moran as the Witch). It is the sombre elements of the fairy tales that become the focus in this sensitive production. It makes the show less magical than it should be, but a trip into these woods is still well worth it.