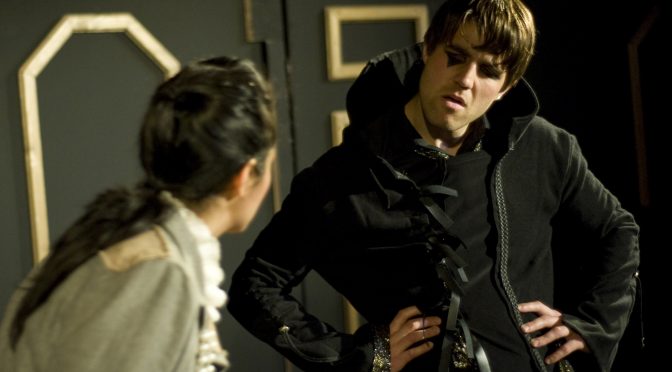 The Malcontent is a Jacobean revenge drama by John Marston. It could easily be a dry text, of mainly academic interest, but is handled as a thriller by the Custom/Practice Company at Kennington’s White Bear Theatre. In just 90 minutes improbable plot twists and court intrigues are rocketed through, making the play engaging and entertaining.

Marston’s Malcontent, Malevole by name, just to make things clear, is a divided character, appropriate since he is really a disguised Duke residing at his rival’s court. Parading as “more discontent than Lucifer”, his “fetterless” tongue is allowed licence at court just as a fool would be in Shakespeare, and he sets out to cause trouble and expose hypocrisy. It’s just a shame that he ends up being a bit wet. Adam Howden gives the role his very best – flamboyant as the cynic and convincing as the dashing Duke. And Howden isn’t the only talent that the casting directors present on the evening I attended should take note of.

The production does suffer from a common fringe complaint – a uniformly young cast. Although it is cruel to pick out one example, you couldn’t encounter a less likely candidate for gout than the slender Richard Kiess. It’s jarring: yet his is a fine performance that shows commendable comic skills. Lorenzo Martelli plays the new Duke fluently and there is a startling performance from Shanaya Rafaat as Maquerelle, a lady-in-waiting who serves the court’s vice needs, arranging assignations and lusting after bodies and money herself. Rafaat is spirited and riveting.

Accolades must also go to Rae McKen, whose direction is a force to be reckoned with. Clearly undaunted by the language, she presents the plot with admirable clarity, skilfully avoiding the play’s pitfalls, including its occasionally pious tones – this sexy, pacy production really grips you.

Written 26 November 2011 for The London Magazine