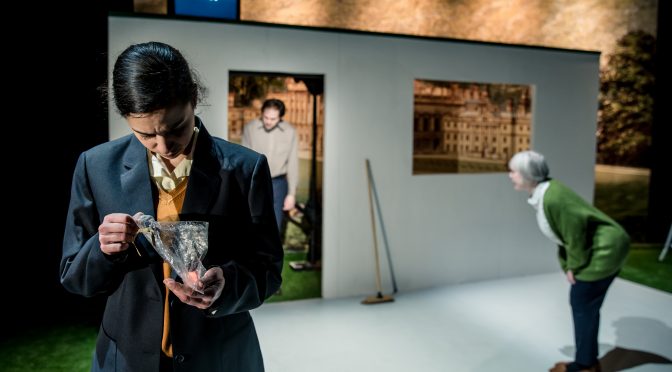 This new work from Kandinsky Theatre is about homes, communities and the housing crisis in London. Issues such as the poor planning of estates, and the inaccessible pricing of new buildings in London, are all addressed with a sensibly even hand so that the debate is comprehensive and intelligent.

Unlike the homes we see on stage, the architecture of this theatrical piece is sound. Focusing on one estate, and one family who moved in when it felt like a utopia, is a good idea. The play goes back and forth in time effortlessly, as we come up to date to see the family’s daughter holding out for a better price from the land’s new developers – a topical scenario with plenty of emotive power. But as a devised piece the play’s construction runs into problems: too many plot lines are raised and left unexplored. The show could easily be expanded beyond its 80 minutes and should have been edited with a stricter hand by its co-writers James Yeatman and Lauren Mooney.

As for the delivery of the show, a trio of performers does very well indeed. Amelda Brown effortlessly portrays both mother and daughter as the play moves around in time. As the former, she shows a steely determination and wins sympathy trying to build a community, then, as the daughter she is excluded from the area due to gentrification. Danusia Samal and Hamish MacDougall take on a wider variety of roles and there’s some snagging – pretending to be a dog is an idea that should have been abandoned in the rehearsal room – but both acquit themselves admirably and again manage the change in attitudes over time superbly. What Kandinsky has built here is something to be proud of.