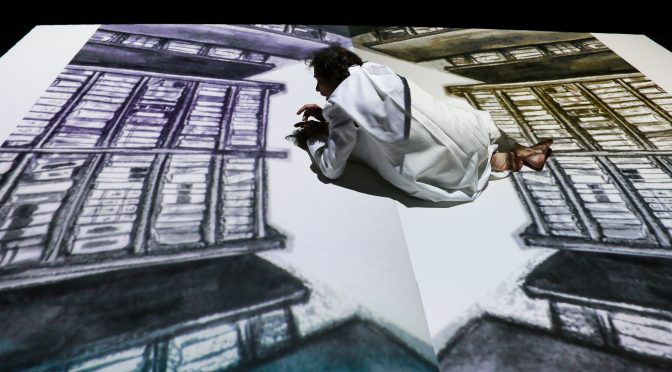 Xameleon Theatre works with Russian-speaking artists and specialises in bringing their distinctive performance traditions to London. If this latest piece is any indication, producer and artistic director Vlada Lemeshevska has a keen eye for talent, having brought together an admirable team whose work has a clear sense of identity and whose skills both fascinate and excite.

The idea behind Diaries of Madmen isn’t great, though. Marrying Nikolai Gogol’s novella with Pyotr Ilyich Tchaikovsky’s letters proves initially puzzling and ultimately unconvincing. The madness of Gogol’s character Poprischin is incongruously interspersed with Tchaikovsky’s decision to leave the civil service, then the critical drubbing he faced. The parallel between the two stories is forced – delusions of grandeur and ambition along with flights of the imagination are too tenuous as links. A potential theme of unrequited love is, oddly, unexplored. And the culmination is weak: while Poprischin is committed to an asylum, Tchaikovsky destroys his sixth symphony. From the story, there is little insight into mental health or creativity.

Ordinarily it would be difficult for a show to overcome such problems. But, while the idea driving director Konstantin Kamenski’s show may not inspire, his work and his performers are marvellous. It’s a fantastic save brought about with the aid or careful, inventive details, a distinct style of movement aided by Natalia Fedorova that comes close to choreography and some fantastic animation projected on to the floor from Irina Gluzman.

Kamenski’s cast is also exceptional. Irina Kara offers superb support as the mostly mute Mawra, who follows Poprischin around like a living prop. It’s not quite clear why she has to be encumbered so much by a picture frame and a rolling pin, but she manages to portray servility and belligerence simultaneously. Brief glances of her as Tchaikovsky’s sister show that she can also express a dignity and an inner turmoil that the show could easily have exploited further.

Taking both lead male roles, the performance from Oleg Sidorchik is truly bravura. Tchaikovsky has too small a part in the piece to be that well defined, but Sidorchik makes his portrayal distinctive and articulate. You don’t need to speak a word of Russian to admire his delivery, and his stage presence is frequently so magnetic that he distracts from the English surtitles. Whether gambolling around, writhing in agony, doing forward rolls or interacting with his shadow, Sidorchik is clearly a performer at the top of his game and you’d be без ума to miss the chance of seeing him.