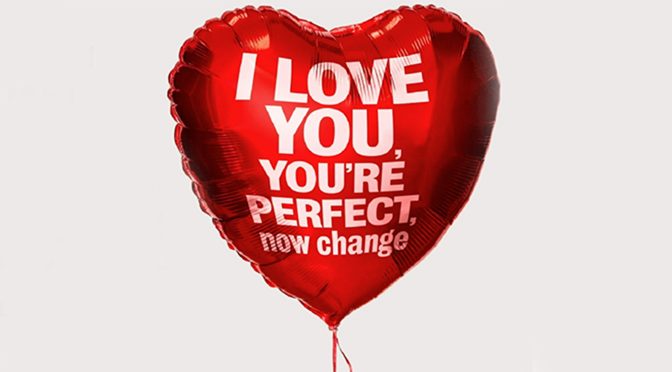 Wildly successful in the US, this musical from Joe DiPietro and Jimmy Roberts is a collection of songs and sketches about romance. There’s lots of dating: drinks, dinners and trips to the movies. The show progresses, if cursorily, to tackle marriage and love in later life. The songs are perky, the humour easy: the show is entertaining if unimpressive.

Off-Broadway origins are easy to spot, with a cast of four taking on a variety of roles. The structure is effective, making you wonder what’s coming next? I Love You, You’re Perfect, Now Change is not boring, but it is predictable. Complaints from and about the opposite sex are tried and tested. Handled lightly enough, there’s little to offend… or surprise.

Efforts to make the show contemporary result in highlights: a number about texting explicit pictures and a mock advertisement with lawyers in bedrooms. But most of the show is mild. One character’s self-description – “awkward and whiney” – could go for nearly all. There’s little variety among those looking for love and, and although there are a couple of tender moments, the pacing is flat.

For this production, director Kirk Jameson uses all manner of camera work to spice up the action and is generally successful. Jameson has a good appreciation of the dry humour and light cynicism here and showcases it admirably. It is the cast that secures success – an exciting and experienced quartet who are a pleasure to watch.

Alice Fearn has two of the best numbers, including a song about being a bridesmaid that she does exceptionally well with. Oliver Tompsett gets to show his comedy skills playing a variety of unsatisfactory male roles. The chemistry between Brenda Edwards and Simon Lipkin is fantastic in more than one number: Sex and the Married Couple might make the whole show worthwhile.

Time and again the performers make good songs sound great and poor jokes passable. They take on a variety of characters and establish each with startling speed. And they sound great. With regards to the cast – I love them, they’re perfect – but maybe change the show?