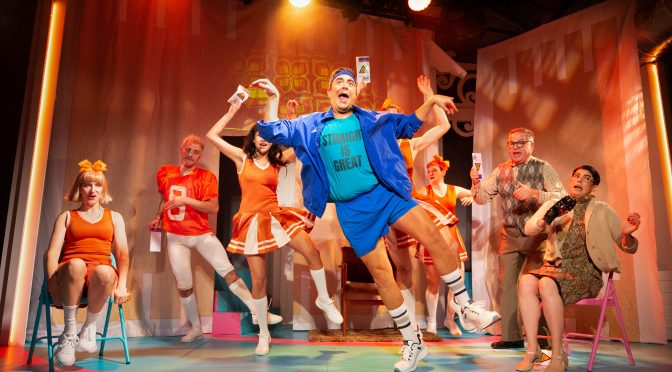 Musical theatre and Jamie Babbit’s 1999 cult film are an easy fit in this new show. If it seems a stretch to make a rom-com movie about teens undergoing gay ‘conversion’ therapy, adding show tunes only aids the quirky appeal. Camp as can be and a lot of fun, this show has a serious aim that makes it utterly heart-warming.

These teens are confused and unhappy, so of course you feel for them. They are being treated terribly. And, for all the stereotypes on stage, Bill Augustin’s book makes sure this is a set of characters we care for. It’s a firm base for the show.

Cheerleading Megan, whose parents pack her off to the True Direction camp before she herself understands her sexuality, is simply sweet but Josie Kemp (stepping up to the role for Jessica Aubrey) does a great job. The romance with a girl called Graham is made more interesting by performer Megan Hill’s carefully controlled angst.

As for the comedy – that’s OK, too. The show has to play with being tasteless (those stereotypes aren’t going to please everyone) and that’s tricky. Take the ‘Simulated Sexual Experience’ that is part of the therapy – it’s flat, despite a good number and a lot of effort.

But I laughed – and the delivery of the jokes will probably improve during the run. The dialogue itself is tight (having the cheerleaders as a kind of Greek chorus could have been explored more). And the show has a great villain (another good move) in Mary Brown, who runs True Direction… with mixed motivations! Another Cover, due to Georgina Hagen’s indisposition, Freddie Love gives a star performance to be proud of, delivering Mary’s many insults with relish.

There is a feelgood factor to But I’m a Cheerleader that proves winning and extends to the cast – this is a show that enjoys letting performers shine.

Doubled-up roles allow cast members Ash Weir, Michael Mather and Kenneth Avery-Clark time in the impress. In superb voice as the camp’s instructor Mike, Noel Sullivan gets to don a wig as a drag queen. And Ciaran Spencer – a third cast member stepping into a different role – should also be pleased. Best wishes to those ill and well done all on working together so well.

It helps that what the cast has to work with is solid as well as upbeat. The music by Andrew Abrams is heavy on preppy, with neat cheerleading touches, although ballads show further skills. The opening numbers are strong and the finale of the first act excellent. Augustin’s lyrics are clear, sometimes a little too easy, but getting Gertrude Stein and Georgia O’Keeffe into a song scores points. Best of all, this is more than a collection of songs – Abrams has written a coherent score that will please anyone who loves musicals.

The show is cramped, despite the clever set by David Shields, so the choreography from Alexzandra Sarmiento doesn’t get much of a chance. I take this as a good sign. There’s a confidence to the piece that bodes well and creates a great atmosphere. But I’m a Cheerleader is begging for a bigger venue, and plenty would cheer if it got one.