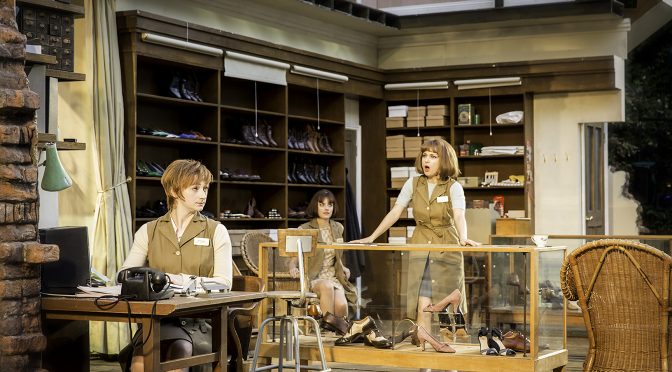 Updating the action from the Victorian era to the 1960s, not unlike smash hit One Man Two Guvnors, makes a comfy fit that brings Hobson’s bigotry closer to home and utilises some great music from the period. The potential for drama suffers a little by the move to the swinging sixties – Hobson is too clearly on the losing side – but there’s enough family tension to entertain, and the emphasis on jokes is a wise choice. If you like your humour Northern, you’ll be laughing a lot.

Mark Benton takes the role of the troubled trader. Certainly not more sinned against than sinning, Benton ensures he’s too funny to be sinister – which is saying something given his bullying, snobbish hypocrisy – and it’s a joy to see him “diddled”. Pitted against him are his three graceless daughters, working in the shop for free while plotting lives, or at least husbands, of their own. It’s the year of women at work in the theatre with The Pyjama Game running and Made in Dagenham coming soon. Hobson’s Choice makes an interesting precursor: literally, sisters doing it for themselves.

Hannah Britland and Nadia Clifford fill the younger sisters with spirit, while Jodie McNee is electric as Maggie. Razor-sharp and determined to tame her father, Maggie never lets us doubt the intelligence beneath the plain speaking, and cleverly understated touches show her vulnerability, too.

This is Fall’s focus – the love story at the heart of the piece and Maggie’s choice to find a man for herself. Selecting her father’s employee indicates a radical streak that makes her heroic. Karl Davies performs as Willie, the lad she transforms, and their unusual courtship produces the finest scenes in the show. Davies’ performance is so endearing you’re behind him all the way. All power to this Willie. And the woman behind him, of course.

Written 18 June 2014 for The London Magazine