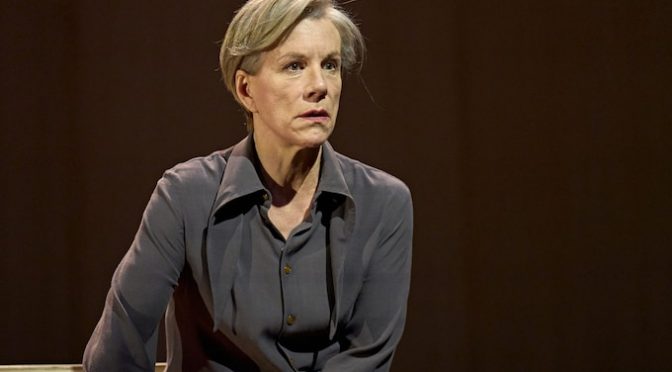 It’s not hard to make theatre contemporary; cram a work with topical concerns at your peril. This play, transferring from the Almeida and created by Robert Icke, has it all: abortion, anti-Semitism, Alzheimer’s disease, medical ethics, euthanasia, politics, racism, religion and sexism. And above all comes the hot topic of identity. The unusual thing about The Doctor is that it can boast rigour and passion in equal measure, making it a phenomenal work.

“The best way to die”

The action, in a play which is mostly people talking, starts with a priest refused access to a dying young girl. This begins a battle between medicine and religion that is a big enough topic on its own. The contest isn’t just fought on social media (although Icke’s insight here is strong and could make another play of its own) but shows divisions within the hospital staff that create the atmosphere of a thriller.

Icke opens up issues that connect to the medical dilemma of what a patient wants and what the best treatment is – and he refuses to edit. The head of the hospital, Ruth Wolff, and the institution she founded come under the spotlight and stakes escalate to great effect. The question becomes how much impact identity, including beliefs and background, does or should have – or is all that just  “biographical nonsense”?

Icke doesn’t make any of this simple – quite rightly. Wolff, depicted by Juliet Stevenson who gives one of the best performances on a stage I’ve ever seen, wants to be “crystal clear” but is an ambiguous character. Her dry humour and self-awareness will appeal even if her opinions do not, she commands respect even with her flaws. But the character’s private life is deliberately confusing on stage; her partner (played with great sensitivity by Juliet Garricks) and a young person who comes to visit her home are puzzles. There are reasons, and as we learn more the emotional impact is great. Just be prepared.

Now for a big spoiler.

The race and gender of many characters is not the same as that of the performers cast in the role. It’s a debate in theatre, touching on opportunity and authenticity, brought to this stage with particular effect. In terms of drama, the revelations about characters are startling. The difference between differences we can and cannot see could not be made more starkly. The casting makes an intriguing point in a play where identification is so central.

It’s essential to Wolff that she compartmentalises her professional and her private life. Icke reveals how difficult this has become. Does Wolff’s reserve deny something to others? Does she really have the option of keeping her own heritage or sexuality to herself? As pressure mounts, Wolff chooses to defend herself on TV (a ruthless device to present a variety of views as well as a humiliating experience for the character). Woolf’s privilege becomes an explosive focal point. Whether there is any justice in this scene or merely martyrdom for Wolff will keep you thinking late into the night.

A lot of The Doctor is extreme. From the patient whose tragic death starts everything to the radical opinions and articulate characters that we meet. Woolf and her colleagues are brilliant people working to cure dementia (another subject matter powerfully handled). The rage and fury in the play – from everyone – is palpable, culminating in a scene of Stevenson running in circles which feels close to a panic attack. There’s certainly the danger of leaving the show with a headache – everyone shouts an awful lot.

This much conviction can be scary, but does the obstinacy of the characters become unbelievable? Icke tries to shut down the potential comfort of dismissing so many of them as bigots; the (somewhat flat) roles of a Government minister and the hospital’s PR manager (well performed by Preeya Kalidas and Mariah Louca) aim to be practical or calm…but prove useless. Little can be dismissed outright, rather, there are divisions here that cannot be overcome. There is little hope, despite the play searching for just that quality. Icke sees a polarized world – one that may strike you as contrived, but without doubt, makes for intense drama.