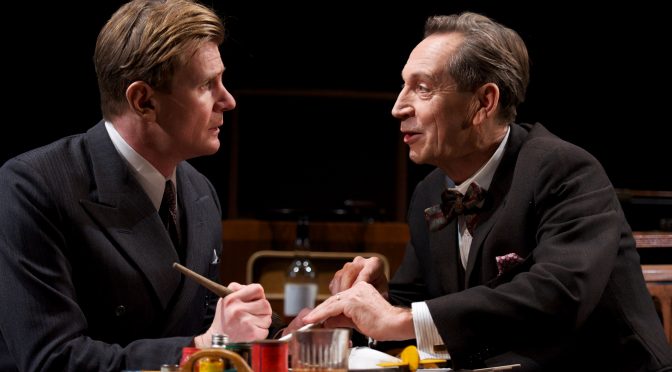 Director Adrian Noble has a hit on his hands with his new production of The King’s Speech at Wyndham’s Theatre. Buoyed by the success of the film and interest in all things royal, the play is an entertaining work with humour and a touching sentimentality. And, to warm the hearts of theatregoers, it isn’t an adaptation. Remember, please, that David Seidler’s play came first.

And what a fine, well crafted piece it is. We all know the story of George VI’s struggle with his speech impediment – and his therapist Lionel Logue is now a household name – but the clear plotting of The King’s Speech and the skilful re-imagining of the pre-war period still impresses. It isn’t inspired or adventurous stuff – the play seems too short to allow any journey of self-discovery for its characters to really take off – but Seidler knows his job and does it well.

The King’s Speech works superbly as theatre. Noble stages at speed and Anthony Ward’s revolving design, around a gigantic frame, not only echoes the play’s theme of presentation but also focuses attention on the acting. No fancy locations or fetishisation of props here – the piece is theatrical enough to rest confidently on its story.

Noble’s is a focused presentation that gets the most out of his cast. There are stirring cameos from Joss Ackland as George V and Ian McNeice as Winston Churchill. Charles Edwards gives a technically astounding performance as the stuttering royal, swearing, singing and dancing his way through the speeches that terrify him, and Jonathan Hyde is full of charm as the “familiar” mentor Logue who becomes almost part of the family. Lionel’s wife Myrtle is made into a major role with a stealing performance from Charlotte Randle. Desperate to return back to Australia but devoted to her husband’s ambition, Myrtle’s forceful stage presence highlights a fascinating triangle of affection that derives from this production’s proud theatricality.

Written 28 March 2012 for The London Magazine