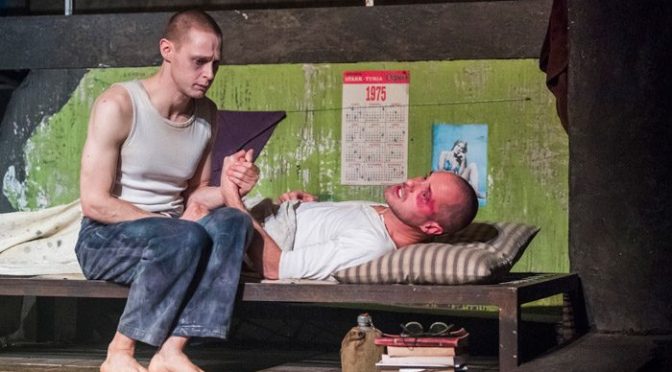 Four decades is a long time in sexual politics, but it makes this revival of Manuel Puig’s story all the more interesting. There’s no shortage of clichés about gay life surrounding the imprisoned Molina, some of which might make you feel uncomfortable. But, as the relationship with his cell mate Valentin develops into something ‘beyond’ masculine and feminine, we see more clearly now than ever the original intention that Molina is a transgendered character. Missing the opportunity to cast a performer who identifies as such in the role is a debate I leave to others better qualified to discuss. But this timely new version, by José Rivera and Allan Baker, provides the kind of detailed depiction of human sexuality many crave to see on stage.
Jon Bausor’s ambitious design visualises Molina’s fantasy life. As he passes the time recounting and embellishing old movie plots, there are projections on to prison corridors and sound effects. The space surrounding the couple’s cell come into use: as love blossoms, the men start to venture outside, each step they take dramatically thrilling, leading to a magically poignant finale of escape through death. Sorry for the plot spoiler, but it would be surprising if anyone thought the play, set in a police state and full of torture, would end happily. The important point is a victory, of sorts, with both men’s spirits unconquered.
The show is a triumph for its stars, on stage without a break for just shy of two hours. Declan Bennett, well known as a musical theatre performer, shows his strength an actor playing Valentin. He’s a political prisoner and, while this element of the plot, and the tension surrounding it, is downplayed, Bennett convinces as a man of powerful integrity and intelligence. Samuel Barnett takes the role of Molina. He may ham up the more theatrical moments a touch, but he is never less than magnetic. Molina bargains with his captors, acting as a double agent, and there could be the suggestion of more complex motivations on his part. But the strategy is to present Molina wholly sympathetically and, pursuing this, Barnett secures affection for his character, making the show deeply moving.
Until 5 May 2018
www.menierchocolatefactory.com
Photo by Tristram Kenton