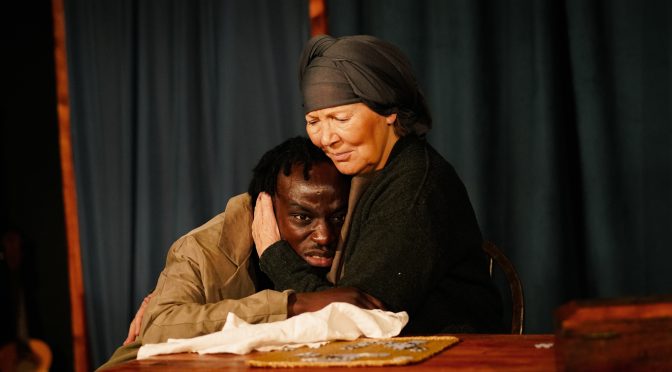 Reconsidering Chekov’s classic play in the light of lockdown sounds interesting. The “idle life” is something most of us experienced during Covid and it can be argued that generational conflicts – a forte for Chekov – have been exacerbated by the epidemic. But don’t be fooled by the sales pitch for Candid Broads’ production. Set in Russia, and in the past, there’s no explication of new ideas. This is a pretty traditional Uncle Vanya. And, unfortunately, it is not a very good one.

To be fair, the production isn’t weighed down by period detail – good. And changes to dialogue are handled well so that speech feels fresh, even if you wouldn’t call changes radical. There’s an emphasis on any self-awareness characters display (plentiful in the text) that is interesting. As an adaptation, this Uncle Vanya shows promise. But Kieran Bourne’s direction and, I’m afraid to say, his cast, let the production down.

Too many of the performances seem a struggle. Much of the acting is too declamatory. The cast circle around the small space for no reason, fumbling with tea cups and shot glasses, in search of something to do with their hands. Differences of emotion are expressed too often simply by changes in volume. There is little sense of continuity with the majority of characters – as if scenes have been rehearsed in isolation without thinking how they fit into the play as a whole. And there’s another big problem – some characters, most notable David Whiting’s Serebryakov, have been abbreviated so much that comprehension is endangered: without previous knowledge of the play you might struggle to work out what is going on.

There are exceptions. Sally Faulkner does her best to anchor the show, injecting some much needed humanity as the family servant Marina. Faye Bennett’s capable performance also stirs emotions as the lovesick Sonya. Along with Jonathan George, who takes the title role, Bennett is the only one who manages Chekhov’s humour. George is very good indeed – technically superior and able to swiftly convey the play’s themes and tensions. We understand Vanya’s struggle quickly and wait for developments that George delivers with confidence. But Uncle Vanya isn’t just about Uncle Vanya! Even George’s achievement comes with the bitter edge of highlighting the production’s faults.