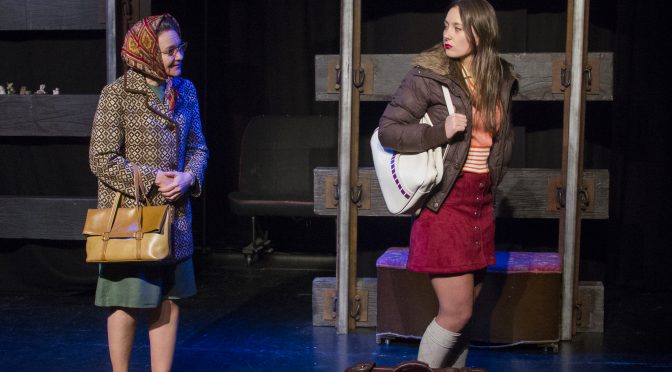 Travelling briefly to London from Cornwall, Pipeline Theatre’s play is a strong piece of storytelling, written and directed by Jon Welch. Get your tickets quickly, as this multi-layered story, drawing parallels between two very different women’s lives, is a powerful and rewarding work.

Flitting between the arrival of Lotte in London with Kindertransport and her fostering of troubled teenager Dinah many years later, there’s no shortage of plot here. The script feels crammed at times, but the central relationship, set in the 1970s and tapping into trauma, makes for great drama.

These are dream roles for actresses. Playing the young Lotte and Dinah is Hannah Stephens. The former couldn’t be a bigger contrast to the damaged teenager who was abandoned at birth and disturbingly associates sex with power. Stephens’ conveys a dangerous edge, alongside fragility, brilliantly.

Juliet Welch also doubles roles, as the older Lotte and as Lotte’s first carer when she arrives from Germany. These are carefully crafted performances – her face changes remarkably between the roles and Lotte’s trace of an accent is well studied. Welch’s ability to make this “crazy old woman” more than simply endearing, with the odd penetrating remark, is well honed.

There are occasional moments when the direction feels laboured, often those around the frequent changes of (well-sourced) costumes. Some flashback scenes are frustratingly short. But Transports, gaining poignancy from being inspired by the real-life story of Liesl Munden, still alive and well in Cornwall, is impressively unsentimental. Similarities between Lotte and Dinah’s emotions, focusing on violence against women, are powerful but never forced – they resonate rather than deafen. Best of all are Dinah’s monologues – flashes of poetry that are electric and show that this often quiet play is powered by rocket fuel.