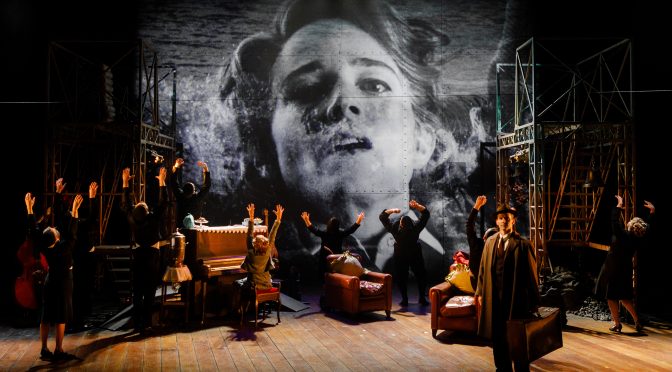 Seeing Emma Rice’s adaptation of Noel Coward’s film back in 2008 has long stayed in my memory – this is the story of a doomed romance that makes you fall in love with the theatre. Rice’s invention, changing Coward’s piece in many ways, as well as her passion and creativity, all make this an unmissable revival. The celebration at its return seems to have skewed the production slightly – put simply, it’s too funny – but the sense of triumph that it is back is one I wholeheartedly share.

The setting for the show is the cinema that hosted the movie’s premiere back in 1946, and the interactions between projected films and actors that occur throughout are breathtaking. But this isn’t a show of gimmicks. Rather, imagination is the key: from when Alec and Laura rise from seats amongst the audience to recount their love at first sight, leading to their painful goodbye, Rice adds music, acrobatics and witty theatricality at any opportunity – not a scene goes by without a memorable moment.

The couple, who contemplate rather than consummate their love, are well played by Jim Sturgeon and Isabella Pollen. Rice recasts the story to focus more on Laura in impressively empowering fashion, and Pollen conveys her character’s inner turmoil. Strong performances from two other couples, designed to show love at different stages of life, share the stage with Rice elaborating them all from Coward’s original. Lucy Tackeray and Dean Nolan delight as an older courting pair, a delicious combination of entendre and genuine passion. Beverly Rudd and Jos Slovick have roles as younger lovers and are similarly endearing. Slovick’s musical skills impress, and both get a lot of laughs.

The sense of taboo that drove Coward’s writing has disappeared and the story lacks its original tension as a result. It’s still moving – but Rice wants romance and she delivers it. There are so many beautiful moments in the production that hearts skip many a beat and it is the beauty of this Brief Encounter rather than its tragedy that we carry away with us.