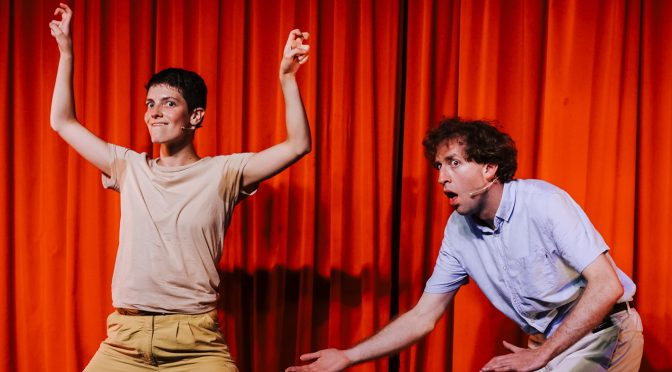 Theatre company Clownfish delivers far more than its name implies. In this show, aimed at young children, we meet all kinds of animals from all over the world in the company of none other than David Attenborough (kind of).

Actually, when Attenborough doesn’t turn up, Jonathan Tilley takes his part. The impersonation is good. Tilley is also a female sloth, a mother orangutan and a regurgitating seagull. His co-star and fellow creator of the show, Jess Clough-McRae, plays all the other animals. It really is that mad an idea… and the kids love it.

There’s plenty of silliness – they are clowning, after all – in the way both move and the faces they make. Can you guess the animal before you’re told (this budding naturalist did very well)? The plasticity of both performers’ faces is remarkable. The noises they make show skills as mimics while they work hard to connect to the audience.

The show is a heartfelt tribute to Attenborough’s TV work, sharing the humour and drama that come from watching the natural world. Clough-McRae’s anthropomorphising brings laughs and pathos. There’s a stunning reminder of environmentalism that uses just a single plastic bag – it brought a tear to my eye.

It is the simplicity of the show that impresses most: just two artists creating a world “teeming with life”. You can count the props on one hand and there’s no set. The sound design is brilliantly unobtrusive. The physicality on offer isn’t a matter of gymnastics (although it’s surely harder than it looks). Instead, it’s all about imagination – the performers’ and ours. Think about the audacity of the idea again! I can’t conceive of a better introduction to the theatre, as this show proves that you can do anything on a stage.