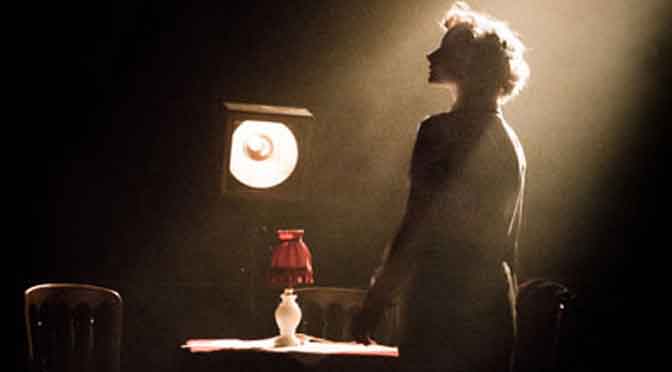 The Thrill of Love has newly arrived in London from the New Vic Theatre in Newcastle-under-Lyme. A small admission of bias – I saw (and loved) my first ever play at the beautiful New Vic, so I can’t help feeling proud of it for producing this skilful take on the Ruth Ellis story.

Ellis was, of course, the last woman to be hanged in Britain, in 1955, and the play’s focus is entirely on her – her murdered lover David Blakely doesn’t even make an appearance. She’s a complex character, who loves neither wisely nor well, abused but also admirably independent, with a drink problem and mental instability that makes you question the soundness of her conviction. It’s a dream role that Faye Castelow makes the most of, and the play’s author, Amanda Whittington, unflinchingly recreates Ellis’s milieu – the gentlemen’s clubs that served as seedy ‘trading floors’ for a ‘girl on the up’ with a misplaced sense of stardom (Hilary Tones gives a tremendous performance as the manageress of The Court Club in Duke Street).

As a narrative device, a detective attempts to fathom Ellis’ motivation for the crime. Despite Robert Gwilym’s best endeavours, it’s the weakest link in the show – odd when everything else is so sure-footed. The sound design and original music from James Earls-Davis are superb, and talented director James Dacre provides terrific theatrical moments, including a key scene where Ellis performs a disturbing striptease accompanied by a diagnosis from the prison doctors.

The Thrill of Love is not a documentary, and the most impressive aspect of Whittington’s writing is the space she makes for her own concerns about women and justice, despite the wealth of factual details. While hindsight sees Ellis as a tragic figure, Blakely was clearly a victim too, and this writing is too strong to eulogise his murderer. We hear nothing from the prosecution, but the case for the defence is thrillingly presented.

Written 4 April 2013 for The London Magazine