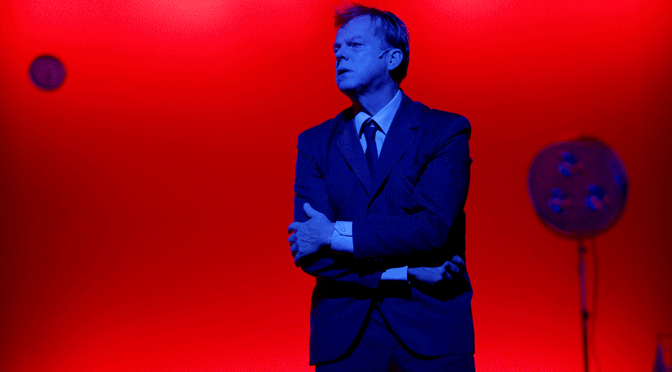 It’s a rare, welcome, event to have a foreign language production in the West End. Doktor Glas, based on the novel by the Swedish master Hjalmar Söderberg, owes its place in town to the presence of Krister Henriksson, famous for his role in the TV show Wallander and riding high on the trend for all detectives Nordic.

In Sweden, Henriksson is a well-known actor on stage as well as screen and he’s clearly passionately committed to this one-man show; he also directed along it with Peder Bjurman. It’s the story of a doctor’s obsessive love for a patient, hatred of her abusive husband and ambivalence towards her lover. And what should the depressed doctor do with the cyanide tablet he just happens to have made in his spare time?

Glas has an almost clichéd abundance of existential angst about him. In his profession he is “able to help others but never himself”, while in his personal life, he fears that time is passing him by. His view that sex should be something like a “ceremony”, seems a little too Fin de siècle. But Glas is still a compelling, if rarefied, character, whose plight does move you.

Henriksson makes the most out of the plays epistolary form. His impersonations of other characters are superb, injecting humour, and the touches of neurosis he brings to the character make his hypersensitivity believable. Glas’s sometimes-breathless anxiety is wonderfully executed. Indeed, Henriksson is so engaging it is hard to share your attention between him and the surtitles provided.

Doktor Glas is hard work, and not just for Henriksson. Though the lighting is superb, the staging is monotonous and the plot so clearly a device for raising philosophical issues it seems superfluous. While Glas’s anguish is portrayed with an intelligence it’s a pleasure to watch on a stage, I can’t help feeling that his predicament should be more interesting than the show allows.

Written 19 April 2013 for The London Magazine