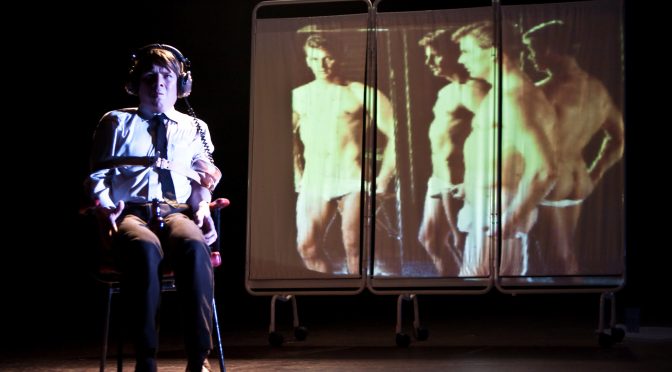 Jonathan Harvey’s Canary is an epic story of gay rights that stretches over 50 years, from imprisonment and aversion ‘therapy’, through political activism and the fear of AIDS, up to the age of celebrity ‘outings’. Harvey knows his subject matter possibly a little too well – analysis is sometimes less than subtle, with action and issues too condensed. Fortunately, he is an entertaining writer who gives us more than a history lesson. He creates an engaging, ambitious story packed with as much drama and humour as it is with politics.

Harvey adopts the sensible device of recounting the history through the life of one man. We begin as Tom, a senior policeman, is about to be exposed as gay by the press and then travel back through his life to see how his decision to remain in the closet affects those close to him. From his betrayal of the men he loves, his marriage and his rejection of his own gay son, we see the long-term repercussions of his lies.

There is a touch of soap opera here and that isn’t meant to sound derogatory. The characters are skilfully crafted so that their part in the story comes to be about them as individuals – no small feat when political issues are involved. They aren’t just symbols but complicated people living through dramatic events. It is often gripping stuff driven by passion and conviction that this politics still matters.

The play is also superbly acted. The younger members of the cast do well to represent what their older selves would have been like years ago. Appropriately, though, in a play that celebrates the achievements of previous activists, it is the older members of the cast who shine. Philip Voss is breathtaking in the variety of roles he has to play. Moving from a wicked impersonation of Mary Whitehouse to standing by his estranged son’s deathbed in a matter of moments. Paula Wilcox is also fantastic playing his wife Ellie. Driven to distraction by her own guilt as well as her husband’s she retreats into fantasy, travelling through time and space and, in between, putting in a splendid Margaret Thatcher impersonation.

The fantastic elements and shifts in time make Harvey’s play highly theatrical. Director Hettie MacDonald deals well with this – actors fly through the air and demonstrate from the audience seats. There is a lot of fun here only slightly let down by a minimal staging that feels as if it consists solely of sofas. The upholstery (and costumes) set the time of the action as well as they can, but some further help might be useful. If the whole thing takes some following, these shifts in time and reality serve well to emphasise the repercussions of events. Scenes when characters look at, or talk to, their younger selves are amongst the most poignant moments in a play bold and powerful enough to have no shortage of them.