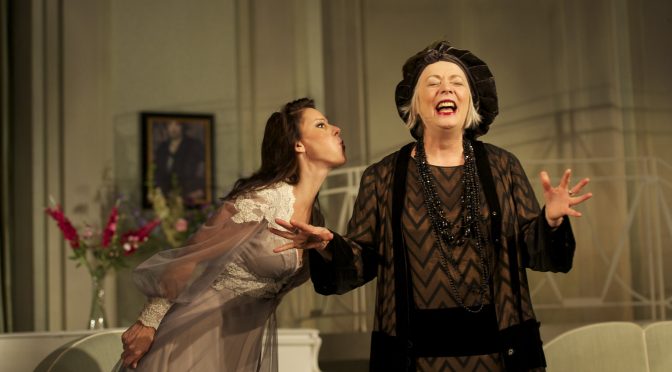 With her strong reputation for revivals, Thea Sharrock is a safe pair of hands to direct Noël Coward’s wartime comedy Blithe Spirit. The production, fresh from Bath, fits into the West End perfectly with a slick all-star cast and general air of quality.

With the Terrance Rattigan revival currently in full swing, reminding us about craftsmanship in playwriting, Blithe Spirit serves to show Coward’s talent in constructing a play. This maybe frivolous stuff but it’s impeccably plotted, and Sharrock’s zippy pace is perfect for bringing out Coward’s bravura dialogue.

The scenario, a wife coming back to haunt her husband and his new relationship after a botched séance, is a comic device that’s brilliant in its simplicity. As an actor himself, Coward provides roles to die for (in this case, literally) and the cast of this production grabs the opportunity with both hands.

Robert Bathurst plays Charles Condomine. A typically vain Coward hero, he is appealing despite his ego and immature behind his sophistication. Bathurst plays the role superbly but issue has to be taken over the fit of his smoking jacket – no matter how tormented by the paranormal a Coward hero may be, he should never be dishabille.

Charles’ wives are superbly cast. Hermione Norris plays the glacial Ruth as the “staccato Sergeant Major” and her acidic delivery is perfect. Ruthie Henshall adds a mischievous grace appropriate to the role of Elvira and is a joy to watch.

Best of all, a much anticipated performance by Alison Steadman finally lays to rest the ghost of Margaret Rutherford in the role of Madam Arcati. Steadman’s Arcati deals with astral bigamy in hilarious down-to-earth fashion. Concerned about the effect of cucumber sandwiches on her trance, she has an eye to innuendo that a constant quest for “subdued moaning” probably induces. Not that she would find any at the Apollo Theatre during Blithe Sprit – just good old-fashioned laughter.