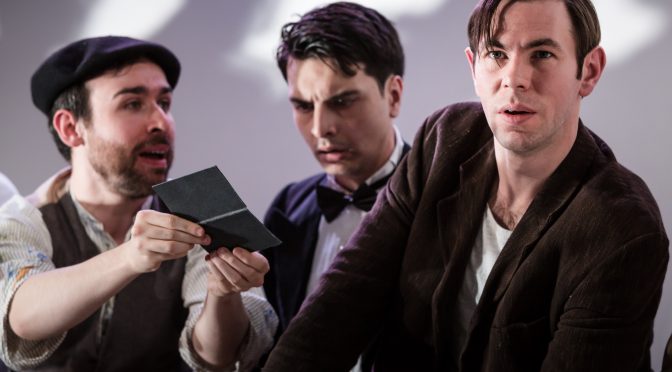 There is a dichotomy within Arthur Miller’s 1964 play, in which we meet ten men captured for questioning by German forces in Occupied France. A cool examination of evil combines with the emotional impact of events. Allying both aspects shows director Phil Willmott’s experience and skill.

Miller observed Nazi war crimes as a journalist and, like Hannah Arendt, adopted an intellectual rigour to understand the complexity of events. The text overflows with ideas, to its detriment – issues of class, race and alterity arrive too thick and too fast. Designer Georgia de Grey’s cold white box of a set makes the perfect environment for this clinical questioning. Two members of the strong cast convey the arguments, which lie heavily on the page, superbly: Brendan O’Rourke as a politicised working man and Gethin Alderman as a psychiatrist hailing from Vienna. Bright lights are appropriate for such an interrogation but also show the growing tension as stories are revealed and beads of sweat on foreheads start to show.

Miller presents his characters as “symbols”, several don’t have names and one, the “Old Jew”, doesn’t speak – great credit to Jeremy Gagan for making this role so effective. Rebuking the Nazi idea that there are “no individuals”, the men’s stories suffuse the work. There’s sterling acting here, including PK Taylor’s hip flask swigging thespian – a deluded pragmatist who dismisses theories and fears. And a collection of impressive breakdowns as the waiting continues. Both Lawrence Boothman and Michael Skellern, as an artist and a waiter, build their performances well. Edward Killingback, as a Vienese nobleman, comes into his own under Alderman’s scrutiny and Henry Wyrley-Birch makes a great contribution as a somewhat token “decent” German.

It’s these glimpses of lives, most about to end, that highlight Willmott and his casts’ talents. A collection of strong performances, finely controlled, that preserve the life and death tension in a piece that occasionally sounds like a textbook, making it work as drama. 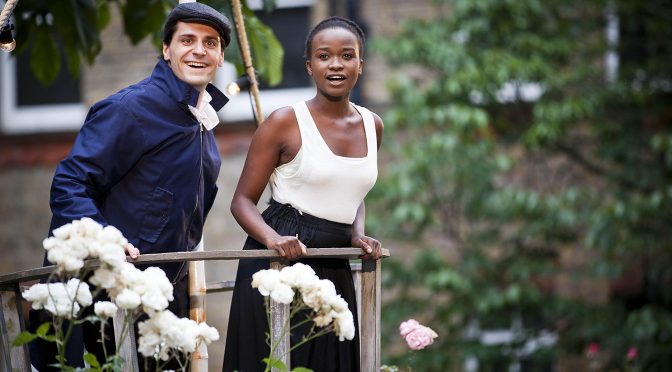 Now in its seventh year at ‘The Actors Church’, Iris Theatre has struck gold with Vik Sivalingam’s Twelfth Night. Using the gardens, making the church itself look divine and including the audience in a good-natured fashion, this show is promenade performance at its best. Crammed with comedy, the play’s contrivances, of separated twins and cross-dressed courtship, are funnier than ever.

A wonderful sense of intimacy is created in the flower-filled gardens. Entreated to follow the actors to different scenes becomes a playful treat – it’s a great game to go wooing Olivia with Viola. And Olivia’s pursuit, when she falls for the twin dressed as a man, is full of complicit cheekiness, embodied by Olivia Onyehara. A duel between characters is conducted with an umbrella and a mop. Even the shrubbery is used as a prop.

The production’s small cast impresses, performing Harry Blake’s music, which subtly infuses the show, as well as by taking on multiple roles. None more so than Henry Wyrley-Birch, whose Sebastian is heroic, while his Andrew Aguecheek elevates a sometimes tiresome role into a central figure – seldom has so much comedy come from a cape. The brief moment when Sebastian and Aguecheek meet is something to look forward to – it’s handled with an endearing humour that’s indicative of how light, lithe and easy to love this show is.