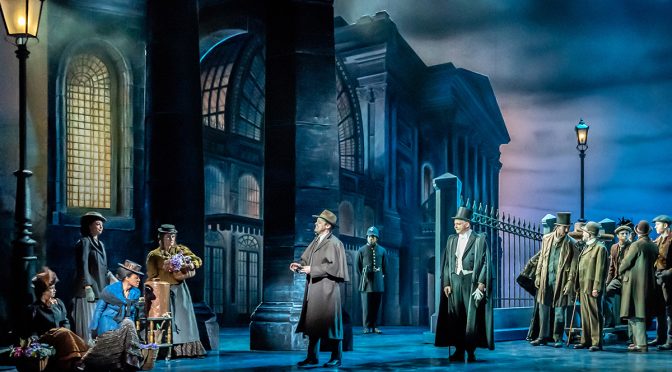 Visiting the London Coliseum this summer, New York’s Lincoln Centre’s revival of Lerner and Loewe’s masterpiece matches the musical’s classic stature. Like the piece, the production oozes quality from start to finish. The show is as consistently close to faultless as you could wish.

It’s the story of flower girl Eliza Doolittle and her Pygmalion transformation by Professor Higgins and Colonel Pickering. But, of course, you knew that. The way in which the lower-class Eliza is treated by the toffs is handled with as much sensitivity as it can be. Director Bartlett Sher’s adoption of a thoughtful pace allows nuance to come through.

The slow(ish) treatment – there is little action here – might be expected to make the almost three-hour show drag a little. But entertainment is guaranteed by the hit score and the consistently clever lyrics. The cut-out-style sets (Michael Yeargan), including Higgin’s revolving home, are appealing, while the costumes (Catherine Zuber) are full of inventive touches.

The production’s biggest strength comes with the strong cast. There is excellent support from Shariff Afifi as Freddie, who sounds wonderful. And strong work from Maureen Beattie’s housekeeping Mrs Pearce. Just don’t get too excited for the too brief appearance of Higgins’ mother (Vanessa Redgrave). Malcolm Sinclair takes the part of Colonel Pickering in his stride – an effortless performance that is a joy to watch. Above all, the leads are a delight. Amara Okereke makes an excellent Eliza, balancing the character’s fearful and feisty qualities; her voice is one of the sweetest I’ve heard but can also be full of temper. Okereke manages to make the number Show Me her own. Travelling with the show from the States, Harry Hadden-Paton is a suitably imperious professor with impeccable comic skills.

Sher is respectful of the show’s heritage all the way to the end. It’s a great moment but, overall, the production is a traditional affair. For critics, the show suffers a little in comparison to another US import, a radical reimagining Oklahoma! at the Young Vic. But few will question these performances or the forceful vision behind the show. Making sure a musical like My Fair Lady gets its fair due is a fantastic achievement. 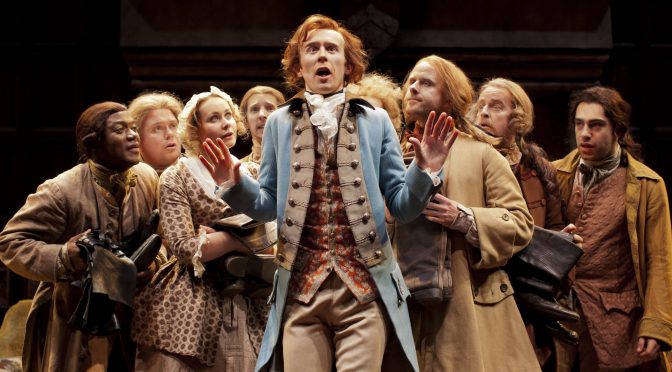 Any production of a comedy at the National Theatre is likely to be compared to the venue’s most recent success, One Man, Two Guvnors. As Richard Bean’s updating of Goldoni’s play moves to Broadway, and opens with a new cast in the West End, the National’s newest attempt to make us merry is a traditional version of another 18th-century classic, Oliver Goldsmith’s She Stoops to Conquer. Remarkably, the National has succeeded again – this is a delightful production with guaranteed belly laughs.

Our hero Marlow is sent to visit his prospective bride Kate, played commendably by Harry Hadden-Paton and Katherine Kelly. But while Marlow can banter with barmaids he is impotent when flirting with women of his own class. A practical joke by Kate’s half-brother Tony Lumpkin (a superb comic creation in the hands of David Fynn) leads Marlow to believe the home of his future father-in-law is the local inn. Exploiting the confusion, Kate joins in the deception, bawdily stooping in class to conquer her diffident suitor.

Another pair of lovers, Constance (the appealing Cush Jumbo) and Hastings, joins the fun, planning to elope under the nose of the former’s guardian, the pretentious and avaricious Mrs Hardcastle. Sophie Thompson is superb in the role, her deliciously exaggerated performance making her one of the most endearing characters of the piece. But it’s John Heffernan as the foppish Hastings who takes the evening’s comic laurels delivering a master class in buffoonery and raillery.

It’s a relief that director Jamie Lloyd doesn’t try anything tricksy with the play. She stoops to conquer is “old-fashioned trumpery” that doesn’t need a modern take. Lloyd has the confidence to play it straight, knowing he just has to control the action, and the laughs will follow. Mark Thompson’s design provides the doors to slam – the text doesn’t really call for them but they add a reassuringly farcical touch. And the music – all pots and pans and trolololing, provided by Ben & Max Ringham, directed and arranged by David Shrubsole, adds immeasurably to the production. You have to see the ensemble perform it to believe how funny it is – that’s if you can hear it above the laughter.

Written 1 February 2012 for The London Magazine