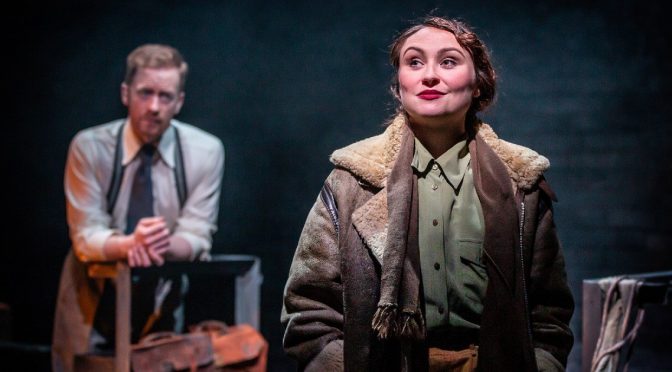 The West End’s smallest stage has big plans now that theatres are open again. Jermyn Street Theatre’s ‘Footprints Festival’ has drama, as well as cabaret and poetry, to enjoy in real life or online. As part of the programme, this visiting production from the Watermill Theatre affords a welcome chance for London audiences to see an already well-received show.

Lone Flyer is a fascinating biographical play about an inspirational woman – the aviation pioneer Amy Johnson. An (almost) rags-to-riches story that takes in escape from a small town, a desire for celebrity and independence, plus a tragic end that could easily move you to tears, Johnson’s life had it all and writer Ade Morris crams in the details. But the truly clever idea is that any life story is really about the people someone loves. Bringing out those other lives makes Johnson’s story bigger, more relatable and ultimately more moving.

So, the story is told well – credit to director Lucy Betts as well as Morris. First, Johnson’s childhood is seen in tandem with the trip that ended her life. Then the same fatal journey is paired with her most famous exploit, flying solo to Australia in 1930. It’s a neat device that provides tension throughout – just like that final flight, Amy’s story and success seem continually precarious.

Adding depth to the action, Morris elaborates on the “risks and rewards” of fame and the sexism Johnson had to fight. Throughout, the pilot’s charisma is clear, and it all makes a fantastic role for Hannah Edwards, who holds attention magnetically. Is Johnson’s desire to be independent really a desire to be alone is a fascinating open question that Morris introduces carefully and balances well. If there is a short fall, the “black moods” Johnson suffered from aren’t explored enough – although they provide highlights in the performance. The scene recounting Johnson’s sister’s suicide is a magnificent one for Edwards, but a question about Johnson’s possible manic depression hangs over the show.

Fantastic as Edwards is, the pleasant surprise in Lone Flyer comes with her co-star Benedict Salter. Performing all the other roles, including some female, Salter excels. From Johnson’s father and early first love (a commitment-shy Swiss man), to the engineer who helped her, each role is a gem. And there’s the fascinating relationship with husband Jim Mollison. Is the fellow pilot a “glamourous shadow” or a man who gets as much publicity out of the affair as Johnson does? The marriage could make a play of its own.

Best of all, Salter is essential to the production’s theatricality – sure to be especially appreciated right now. Betts’ work comes into its own as we travel the world and skip back and forth in time with clarity and concision. Full of neat touches, effective lighting and sound (Johanna Town and Justin Teasdale, respectively) – the numerous scenes are so engrossing that the action (I almost made it to the end without a pun) flies by. With just a few props and a lot of imagination, Lone Flyer is the kind of show that makes you happy to be in the theatre.