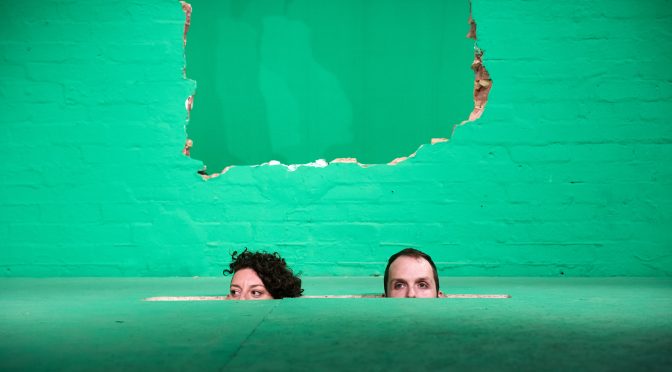 Writers and performers Rachel Mars and Greg Wohead are playing a literal part in this venue’s special “demolition season”. As the theatre says goodbye to its current home, the hole in the title of this show turns out to be real – a big part of the floor has been taken away! Mars and Wohead have given themselves an unusual stage for an original show that’s full of creativity.

Gaping Hole is a two-hander that looks at fiction – in particular the gaps and flaws in plots – with wit, imagination and charm. Starting out with straight comedy, Mars and Wohead chat about silly moments in Hollywood movies in a lovely convivial manner.

A couple of cinematic puzzles are taken up – from The Shawshank Redemption and Titanic – to be elaborated into fantastic stories. The crazy developments (any revelations would be real spoilers) build cleverly; the storytelling skills are impressive.

The work behind crafting these additions to both films is paralleled with effort of a different kind. Building things lies at the heart of Gaping Hole and as the deconstructed floor is covered – what a strange pleasure watching people at work is – we arrive at another section for the show.

The idea of “personal plot holes” asks how our actions don’t fit the stories we like to tell about our own lives. Wohead imagines his own future death while Mars takes a trip into her past. It’s a fascinating idea for artistic motivation that proves tremendously constructive. If there’s a failing, it’s with how short the whole show is.

As the Ovalhouse plans to reopen in Brixton in 2021 (you can follow plans at #RoadToBrixton) the solution seems obvious. A long-time location for radical theatre makers just like Mars and Wohead, here’s hoping they find a home at the new venue so that they can continue to explore and tell their tales.