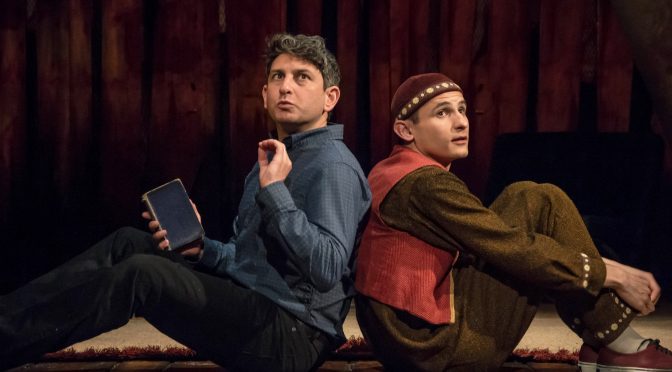 The 2003 novel, by Khaled Hosseini, upon which this play is based, is a tear-jerking page-turner that’s enjoyed huge sales. This welcome stage adaptation follows its success with a second outing in the West End. Using its narrator Amir’s life – and getting the first plaudit out quick, this is a role David Ahmad excels in – it’s a family story, with plenty of guilt and a little redemption, combined with the recent history of Afghanistan. It’s full of big themes but, while not belittling any of them, remains a good old-fashioned yarn.

Amir’s friendship with his servant and playmate Hassan is efficiently conveyed. Andrei Costin does well with a character who’s little more than a blank slate – it’s Amir’s memories of him – distorted by remorse – that we see. Even in the peaceful Kabul of the 1970s there are troubles – caused by the teenage psychopath Assef (Bhavin Bhatt). Of equal import is Amir’s relationship with his father, satisfyingly explored and with a sterling performance from Emilio Doorgasingh, who reveals the character with charisma.

Taking the lead from Matthew Spangler’s clever adaptation, director Giles Croft works at a cracking pace. The story grips so much that the play feels like escapism, so that grim moments – and there are plenty – shock. Theatrical touches, and music performed by Hanif Kahn, are restrained and never distracting.

Amir emigrates to America, follows his dream to become a writer and gets married. This isn’t quite as interesting and feels rushed. But there’s good work again from Doorgasingh. Just as Amir’s guilt about being a “disappointing son” starts to seem self-indulgent he gets the chance to “be good again”. Family secrets are revealed on a dangerous return trip to Afghanistan. The pace doesn’t pick up as much as it could, but the story is powerful and Hosseini’s use of coincidence gives his narrative a self-consciously epic feel.

The Kite Runner has the heavy weight of exposing terrorism in action – upon Amir’s return, Assef is revealed as a Taliban leader. Care and bravery are taken over many emotive issues and scenes of sexual violence are carefully depicted (the show isn’t comfortable family viewing). Despite some structural flaws, the power of stories and theatre to take us behind news headlines and show a common humanity feels, regrettably, more important than ever. Any desire for a deeper understanding is consoling in itself.