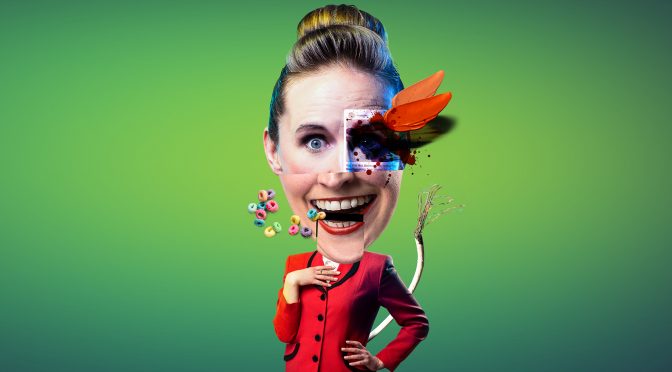 If you like things a bit mad, then Theatre Témoin’s show is for you. Occasionally entertaining, sometimes funny, deliberately provocative and childishly offensive, this is a chaotic affair. And that’s not necessarily a negative. Feed is a mess, but you can understand why. You see, it’s about the internet.

There are two central stories that show promise: a well-intentioned but nonetheless fake news report that goes viral and a teen vlogger driven to insanity by her virtue signalling. It’s tempting to speculate that the work of contributing playwrights Eve Leigh and Erin Judge can be spotted here. But neither tale is explored enough, which is frustrating. The ‘devising cast’ – Louise Lee, Esmee Marsh, Jonathan Peck and Yasmine Yagchi – have elaborated too much around the stories and director Ailin Conant seems to have done little to restrain them.

As the journalist Kate sees her work go viral because of a photo she stole from her girlfriend, and Mia’s blog moves from being about beauty to martyrdom, we are bombarded with the ridiculous. Then some geese turn up for a subplot about foie gras. Again, it could be argued that the chaos comes from a close study of the subject matter. The commitment and the energy are unflagging. Unfortunately, there are too many problems on top of too much content.

Ambition outstrips ability frequently. The imagery of cannibalism and coprophagy is vivid but poorly delivered. The set is clumsy. Interaction with the audience is poor. A central motif with performers ‘rewinding’, as if on video, and then repeating their actions with a tweaked word or gesture, seems nonsensical – why refer back to an old technology? And mock adverts inserted into scenes make for distracting and cheap comedy. A lot of this is easily solved, but there are bigger issues. A sinister SEO guru who bridges both stories is too comforting a fantasy; the idea of a controlling force behind internet success, someone that we can blame, is a fiction for conspiracy theorists. And the AI spoken of as having “no morals, no ethics, no monitoring” – yet another topic abandoned – is too much of a cop out.

For all its faults, Feed has a confrontationality that is bracing. It treads the line of accusing its audience with some self-deprecation. Ultimately, of course, it’s all of us who sustain the web. Asking us to look away or share some popcorn with them as events climax shows a sense of the theatrical as well as human insight. And there are intentionally uncomfortable moments when it’s clear nobody is afraid of challenging anyone – and that, at least, is a welcome addition to the theatrical menu.