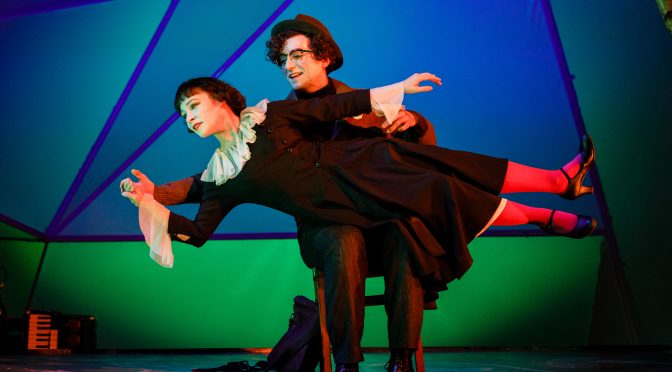 It’s a delight that this early work from director Emma Rice and writer Daniel Jamieson has been revived and returns to London as part of a tour. Telling the tale of Bella and Marc Chagall, it’s a romance made blissful to watch by its combination of music, movement and imagery. Inspired by Marc’s paintings, flight is used a metaphor for love and applying this to the stage makes the show sky high with beauty, passion and emotion.

The performers are Marc Antolin and Daisy Maywood, who play the couple throughout their lives, as well as incidental characters along the way. Joined by multi-talented musicians James Gow and the show’s composer Ian Ross – whose music is integral to the piece – the singing is divine. The movement the piece demands, with choreography from Rice and Etta Murfitt, emphasises the trust actors and lovers have to have in one another and is a marvel: every limb performs, every action is considered.

From the start, Marc and Bella’s love at first sight is captivating. But their marriage is never free of tension. Chagall fell for his role as a genius early, it seems, and Bella suffered. It’s one of many triumphs that this formidable woman gets her side of the story told: it’s 50/50 all the way, with no trace of Bella a victim. Marc published his wife’s writing after her death, and admits that she could have been “hidden” by history. But not under Rice’s watch!

The past and memory are continually evoked as the Chagall story mirrors the momentous events of the Russian Revolution and World War II. The result is a portrayal of Jewish life as sensitive as Chagall’s own work, full of warmth, humour and, of course, the tragedy of anti-Semitism never far away. A scene where our wandering couple unpack their bags as they discuss the Holocaust uses the powerful symbolism of books and shoes in a breathtakingly simple manner.

What really elevates The Flying Lovers of Vitebsk is that Rice and Jamieson have created a uniquely theatrical experience that celebrates the power of make-believe. Highlighted by Bella’s own interest in the stage (which includes Marc’s assumption that she can’t work as she is a mother), imagination is the key to their love and the show. The invention that Rice employs is full of touches that have become her trademarks: the use of costume, and simple props that add humour, with cheeky nods to the mechanics of production. All engender a complicity with the audience that makes a crowd soar all the way through this show.