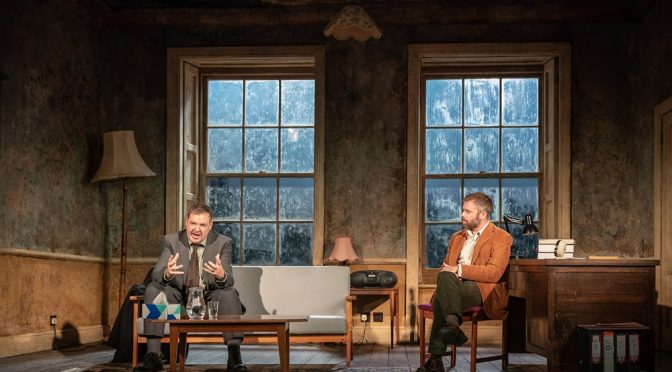 A ghost story that isn’t interested in the supernatural? That’s the idea that makes Conor McPherson’s play original. Therapy sessions for John, who thinks he is haunted by his wife, are combined with scenes from the life of his therapist, Ian. But Shining City doesn’t have much time for spooks… or does it?

McPherson highlights how our perceptions shape our lives – not just John’s hallucinations but Ian’s history, too. Whether they appreciate that they are deluded or believe they are taking control is open to debate. These are lives that seem lonely or stuck. The characters are indulged but interesting, and McPherson’s telling of the tale is excellent

Without doubt, McPherson writes great roles. Rory Keenan as Ian is in every scene and is fantastic. And there’s strong support from Brendan Coyle, Curtis-Lee Ashqar and Michelle Fox.

Might Coyle’s John be funnier? McPherson is famed for his dark wit, even if this play is restrained, but humour isn’t on director Nadia Fall’s agenda. As Coyle recounts “all the silence” in his troubled marriage – behaviour that now makes him guilty – you can appreciate the depth of a skilled portrayal.

The quiet power of Ian anchors the show. A lot of time is spent listening to others talk and an unrushed Keenan becomes fascinating to watch as he suggests the slightest touches of not just boredom, but of someone hiding the fact that they are bored! Balanced with revelations (and questions) about the therapist’s past and future, showing different sides of his character, it’s great stuff. Nonetheless, Fall takes the slow pace too far, which – combined with some lengthy scene changes – dilutes tension too much.

Even if this production is a narrow view of what the text offers, the writing and performances are strong enough to earn it plenty of stars.

As the characters try to convince themselves that their lives are getting better and their perceptions improving, McPherson wants to be clear – those perceptions are only personal. If John buries his guilt, might Ian, somehow, be about to inherit the ghost? There’s a surprise in store that makes sure you leave the theatre with goosebumps.